The unedited video is here:

Sadly this is only a panel, but its a glimpse into the world of the Buchla 300. 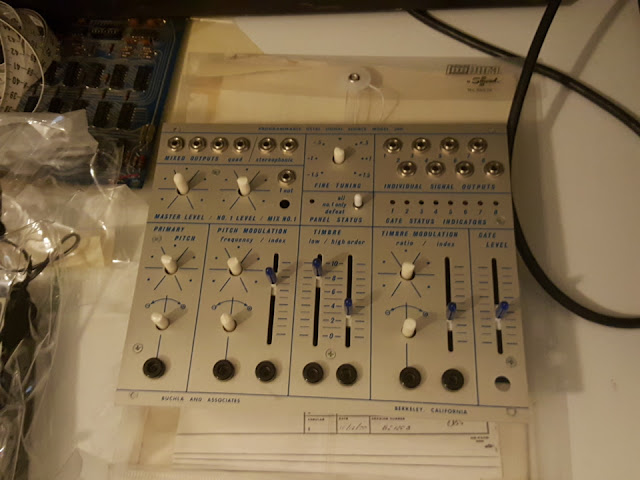 What is it? It's part of  the Buchla 300 Series Electric Music Box.

The 300 is described as a Digital/Analogue Hybrid Music system.
I have never seen one in the flesh and wonder what they were like.

The 360 is very rare. Formally, its called the "360 Programmable Octal Signal Source".
It's a 8 Voice Digital Synthesizer with 3 oscillators and a dedicated Buchla Lowpass/Gate per voice.

The 300 series were basically computer controlled 200 systems and it marked a return to analog modular synthesis when the rest of the world was going digital. ....mid 1970s's.
It used a patch programming language (Patch IV) to control the mostly 200 modules.
What made this special was that though many of the the modules were analog, the 300 offered digital control. This same concept of patch control is found in the modern Buchla 200e. 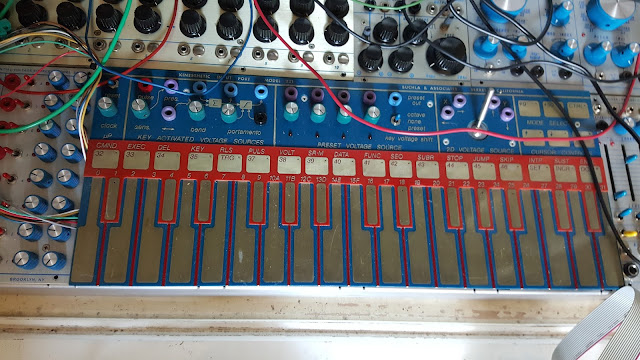 The 221 had two modes :Programming or Performance. 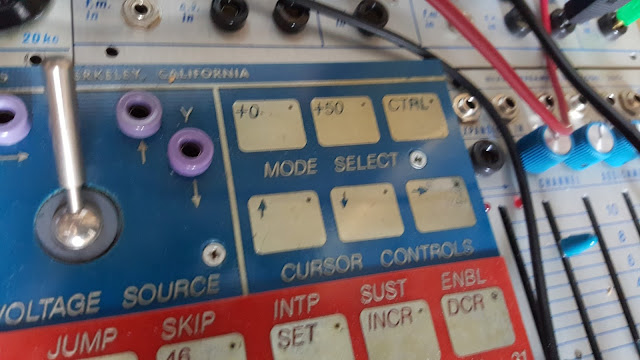 The 221 had 50 real touch sensitive keys which could function in the +0 or in the +50 performance modes.

The 8080 was the basis of the MITS Altair 8800, for which Bill Gates and Paul Allen wrote BASIC.
The rest is history.

Please let me know if there are any errors or omissions.

Email ThisBlogThis!Share to TwitterShare to FacebookShare to Pinterest
Labels: Buchla

Last weekend I made a flying visit to Canberra, the National Capital of Australia.
I visited a few friends and dropped by the National Gallery to see the Tom Roberts
exhibition. Most of these pictures have been with me since I was a child.
They are part of my consciousness, and helped me understand Australia, the country that I today
call home. I was born in Malaysia.

Tom Roberts was born in England & came to Australia at the age of 13. He lived half his life outside the country. Maybe he never quite knew where he belonged. ??? 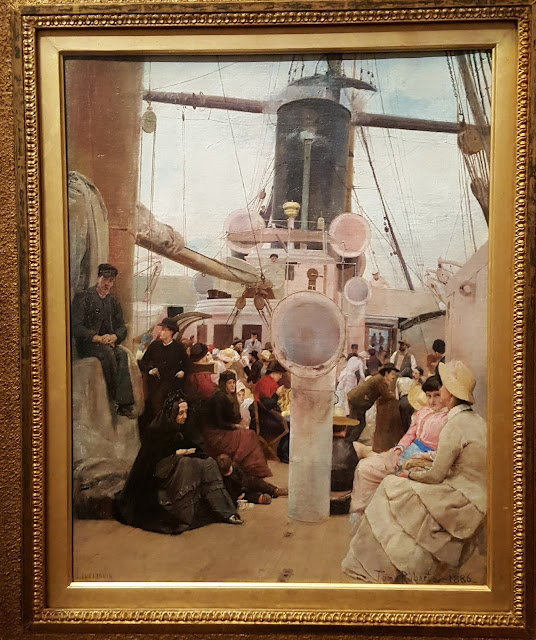 The picture above is called "Coming South".
It depicts the long journey to Australia from Europe. Though I arrived by plane, the sea is still the most
common route most immigrants use.

Its a beautiful composition with a dreamy like quality in the paint. You can see the ship move... its heaving to the right. The funnel, the chimney, the foreground all tilt.

Roberts, probably had to return often to the "mother country" to further his career. But I think you can see from his paintings that his heart belonged to Australia. 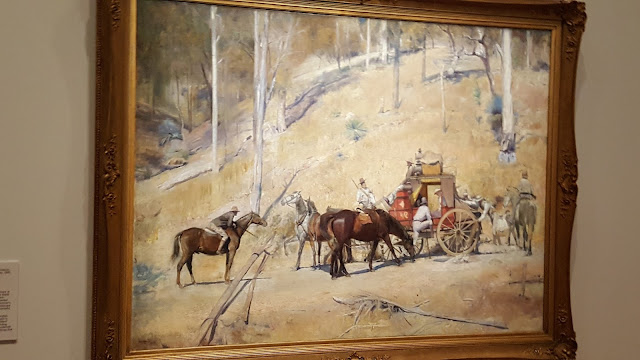 This is an old friend. I've looked at this countless times before and can't get over how relaxed it all this.
It's called "Bailed Up" and depicts a highway robbery. The man on the horse to the left is slouching forward with his gun pointing to the ground. The bushranger (Captain Thunderbolt) looking into the coach may as well be asking the occupants if they are having a nice day. Captain Thunderbolt was known as the "Gentleman Bushranger". 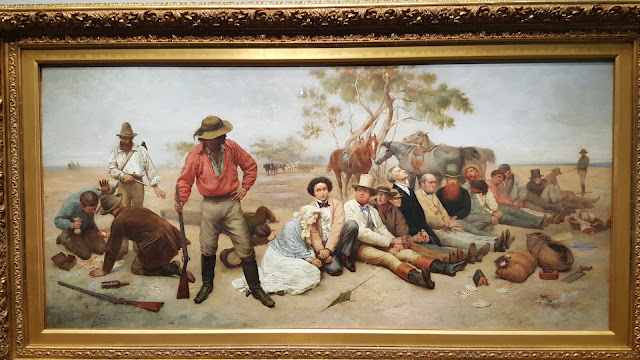 This is William Strutt  - 1887 - "Bushrangers on St Kilda Road". I understand that this is also Captain Thunderbolt.

I think Bailed up is more an examination of the Australian Bush. The heat, the glaring light, the vertical landscape are all beautifully portrayed. It's often described as Australia's greatest landscape painting. 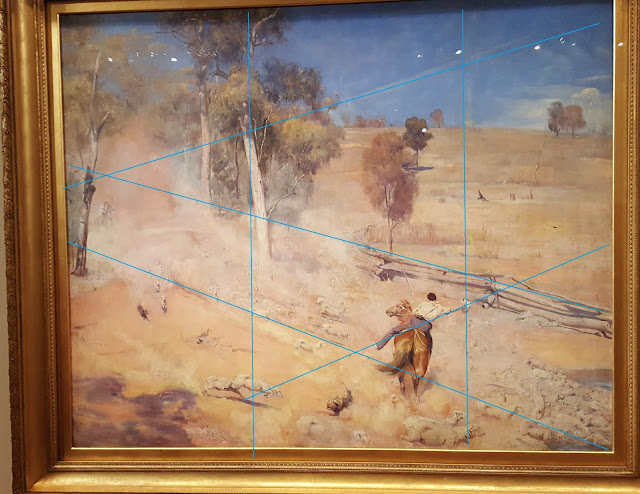 This is a quite complex composition. It's called "the breakaway". The rider's almost futile attempts to control his sheep is emphasized by the tilt of the land, his outstretched arm & leg. 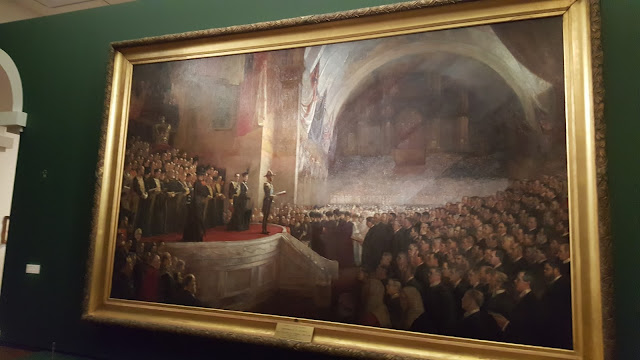 This is known as "the BIG Picture". At 5.65m across and 3.6m tall, the work took 2.5 years to paint.
Officially titled "The Opening of the First Parliament of the Commonwealth of Australia by HRH The Duke of Cornwall and York (later HM King George V), May 9, 1901"

Poor Tom ... he had to paint 269 separate portraits. It must have felt like hard labour. Roberts himself reportedly dubbed the painting his “Frankenstein of 17 feet”.

I much prefer this smaller study: 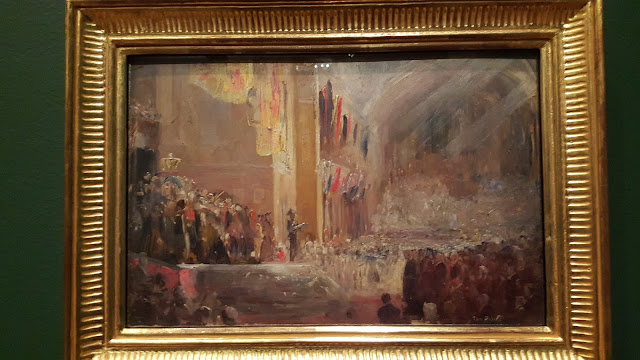 Below we have "The Golden Fleece" 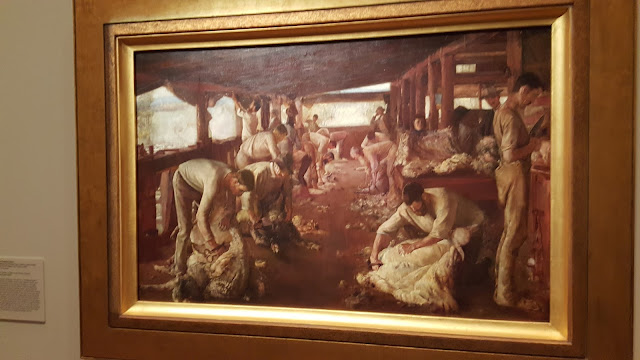 This along with "Shearing the Rams" are two iconic paintings depecting shearing... the backbone of the nation's wealth and prosperity. 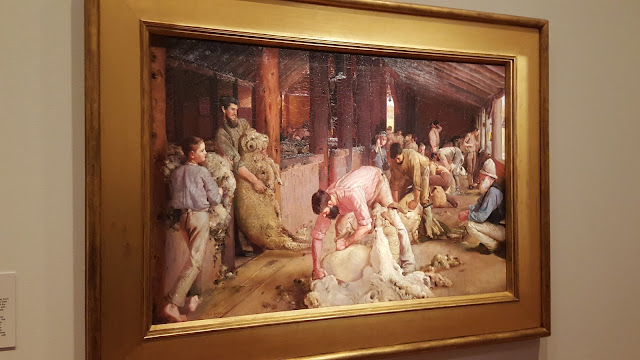 In titling the first painting, "The Golden fleece" was Roberts referencing classical antiquity - Jason & the Argonauts.  Tom was heavily criticized at the time for his depection of manual labour. Critics of the time said, "well it’s a bit vulgar to paint something so realistic, a great artist should connect to the ideology of the Greeks.” (Smith). But I think the figures are noble & heroic.

In a letter to The Argus on July 1880, he wrote: “Being in the bush and feeling the delight and fascination of the great pastoral life and work I have tried to express it … the quick running of the wool carriers, the screwing of the presses, the subdued hum of the hard, fast working and the rhythmic click of the shears, the whole lit warm with the reflection of Australian sunlight.” 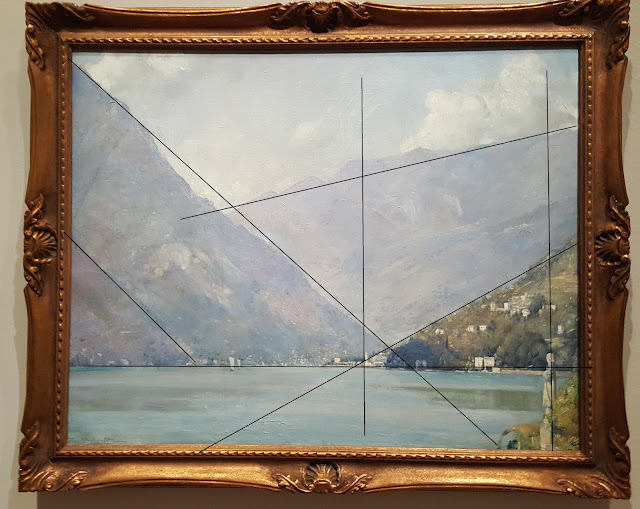 
All, in all, a great exhibition.If you do get a chance to visit Canberra over the Easter weekend, dont miss it.
http://nga.gov.au/

There are 2 standards of the traditional midi connector to TRS cable.
Both standards use pins 2, 5 & 4 of the DIN connector.

This particular configuration makes it easy for connection between a Make-Noise O-Coast & the Korg SQ-1 for example.
You only need a 3.5mm stereo jack to connect them to each other. 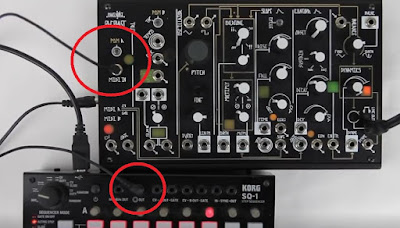 This particular configuration makes it easy for connection between a Arturia BeatStep Pro & the Music 1010 Synthbox for example.
You only need a 3.5mm stereo jack to connect them to each other.


Links
+ Midi association
Posted by Jondent at 05:45 No comments:

Almost all of the settings menu settings are stored in the Deluge’s internal memory,
as opposed to the SD card. To restore the Deluge’s default factory settings, switch it on

while holding down on the select knob. The numeric display will briefly blink “RESE”, indicating
that the reset has been performed.

Some videos using the beautiful 1047 filter/resonator.


The ARP has a combination of LP, BP, HP & notch.
All filter outs are available simultaneously. It very beautiful for obtaining timbres.
esp when Q is turned up. It's so resonate that a pulse applied to the input with make the filter ring.

The Korg Resonator works differently to the ARP as far as I understand.
The PS 3100 uses 3 bandpass filters.

The original video with the unaltered ARP sample is here:

Most synths use a LP filter with a sharp cutoff (24dB) with moderate resonance (Q=10, or 20dB peak).
The ARP specs for this filter claim a resonance from zero to 54dB (or Q between 1/2 and 512).
The filter's bandpass response is a single pole, 6dB.
This is similar to natural acoustic resonators like drums, horns, pipes & strings.

I thought I'd share some pics and a video of the 1023 VCO.
The shape of the pulse & square waves in particular are very interesting.
I have a few 1023s in my system and each has 2 oscillators. So I did compare
one with the other and found lots of variation.

This oscillator features the same waveforms as the 1004 module with a switch for high and low frequency ranges. 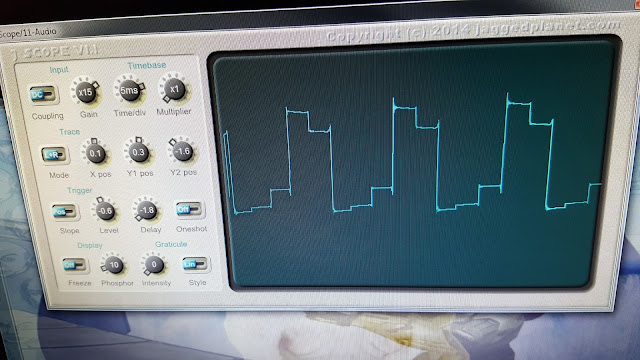 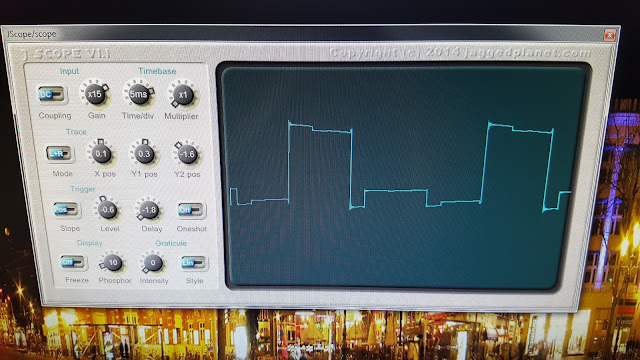 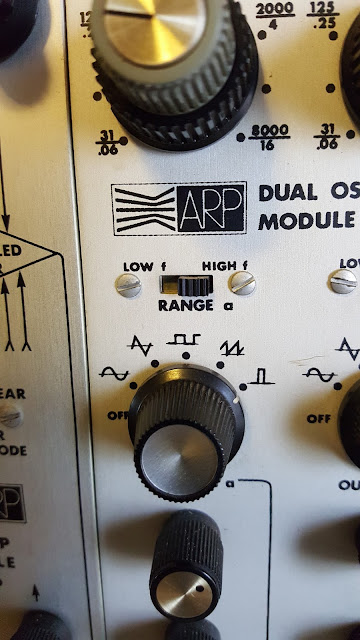 The plugin is from jaggedplanet.com
My favorite oscilloscope vst. 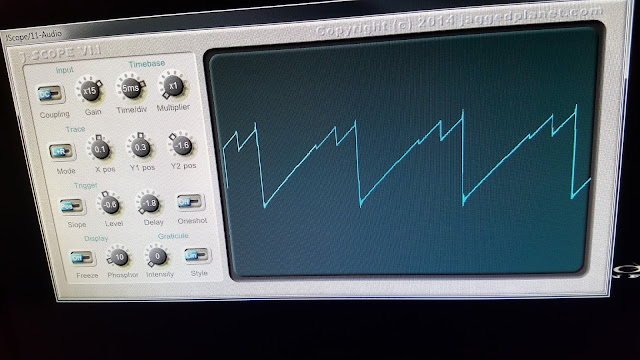 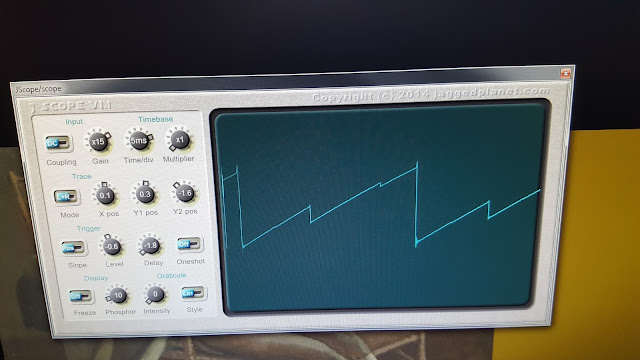 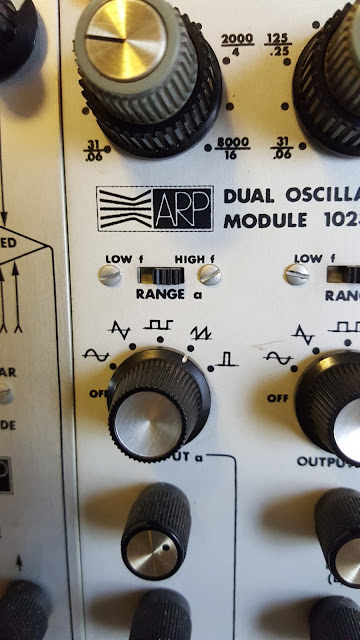 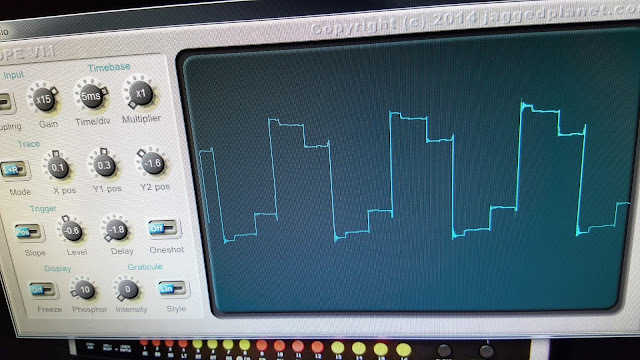 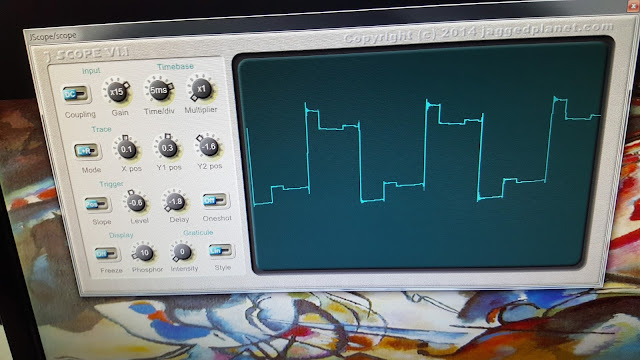 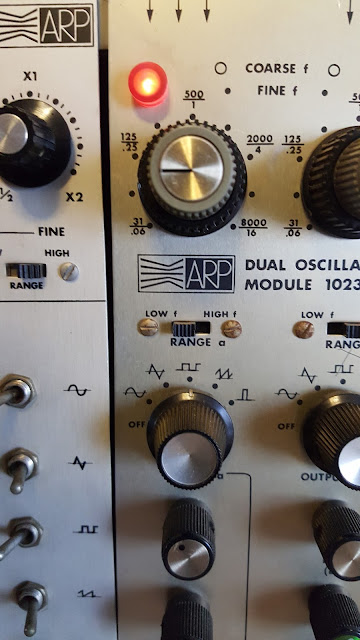 There doesn't appear to be much variation among sine & triangle waves between the various oscillators. 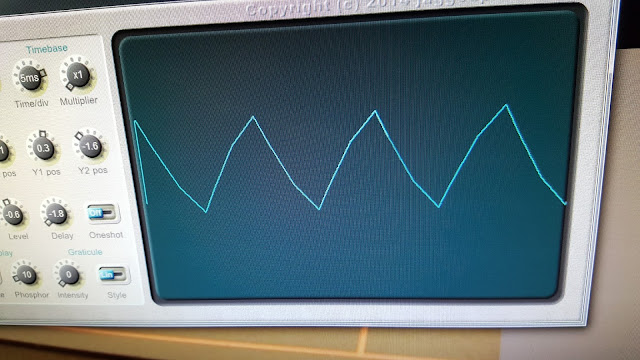 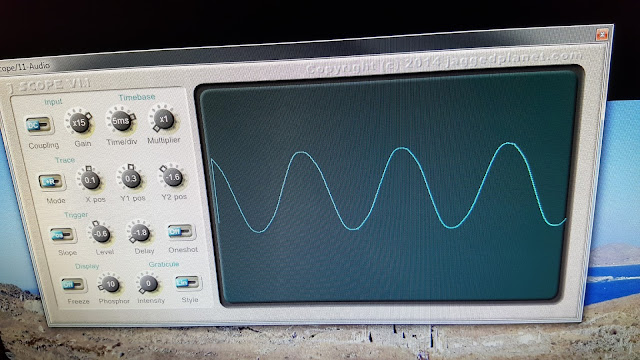 These VCOs are nearly 50 years old so it doesn't surprise me to see variations. Those old caps and resistors all add up to give these beautiful differences that add to the richness of the 2500's sound.
Posted by Jondent at 02:55 No comments:

The shortcuts  use 5 pads 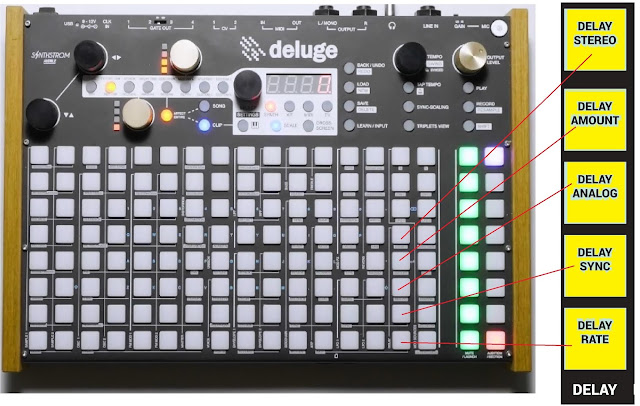 AMOUNT
Sets the amount of feedback from the output back into the delay.
Amount range 0 - 50.
Delay effect and combined feedback

RATE
Sets the rate at which to sync the delay. Range is 0-50.

ANALOG
there are two types : DIGItal or ANALog delay
Analog is higher in CPU usage and may lower voices.