Chittorgarh and the legend of Lady Padmini

It's hard to separate fact from fiction in regard to the first sacking of Chittorgarh on August 26th, 1303.
Many details of the historic battle & the eventual fall of this great city are lost in legend.

At the time, most of Northern India was ruled by the Mughals of Delhi. The period came to be called the "Sultanate of Delhi". It's ruler, Alauddin Khilji came to power after murdering his uncle Jalaluddin Khilji.

A. Khilji was a great strategist and military commander. He is remembered in history for being one of the few rulers in the world to have repeatedly defended his empire against Mongol invasions.
After suppressing these invasions in the north, Khilji began expanding his empire by subjugation first of Gujarat in 1299 and then Ranthambhor in Rajastan in 1301. 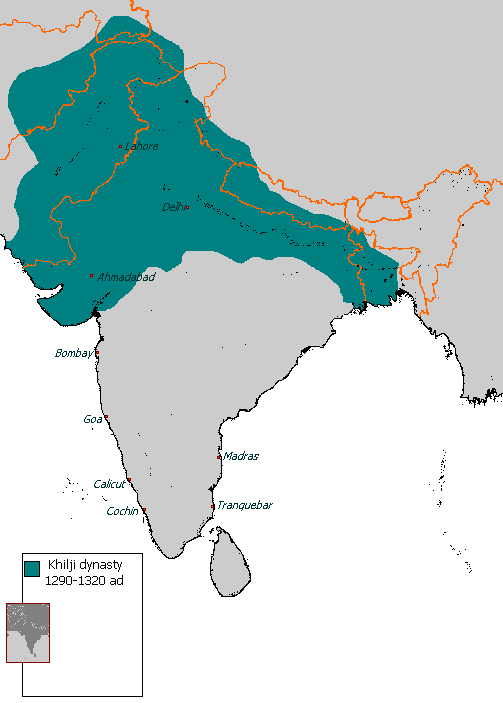 "Khilji dynasty 1290 - 1320"
He then turned his attention towards Chittorgarh in Mewar, Rajasthan which was ruled by Ratan Singh. 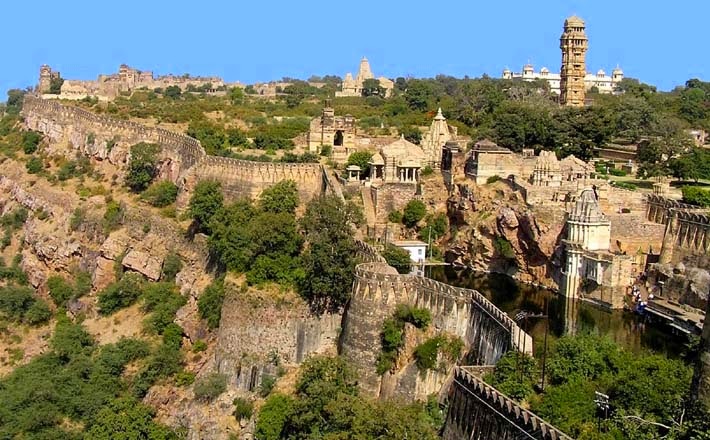 The Rajput King, Rawal Ratan Singh.was described as a brave and noble warrior, a loving husband and a just ruler. His wife Padmini was renouned throughout the land for her ravishing beauty. 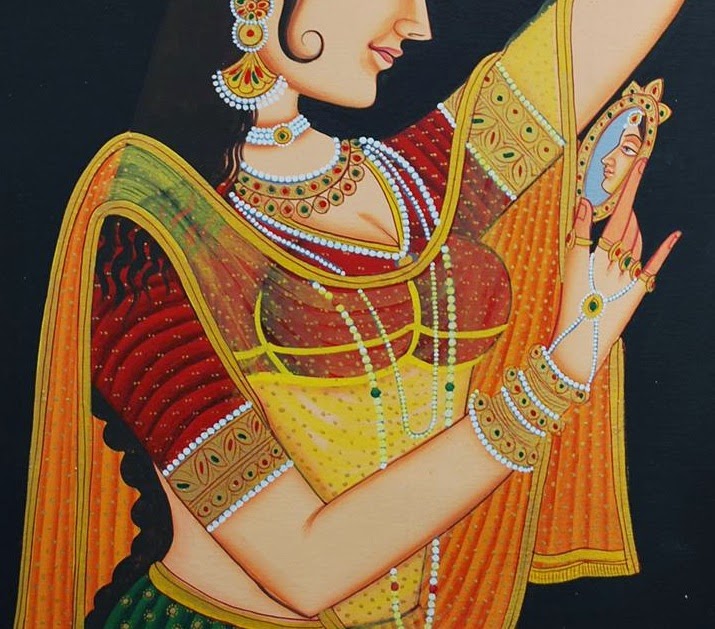 The story goes that the Sultan of Dehli heard about her beauty & decided to confirm this for himself. However, Padmini never left her quarters uncovered and the sultan's request was refused.
Not to be outdone, the Sultan amassed his huge army, and lay seige to Chittorgah.

It's debatable whether the Sultan would have attacked a city just to see the face of one woman.
Chittorgarh itself was of great strategic importance and had earlier blocked his armies advance on
Gujarat so there were many reasons for its subjugation. (But these details would ruin a good story). 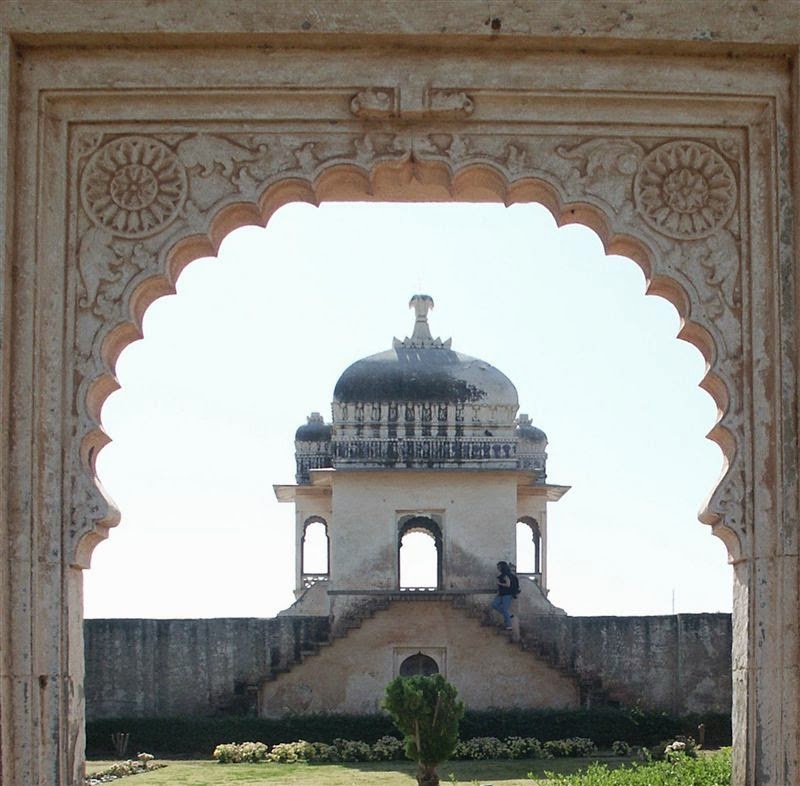 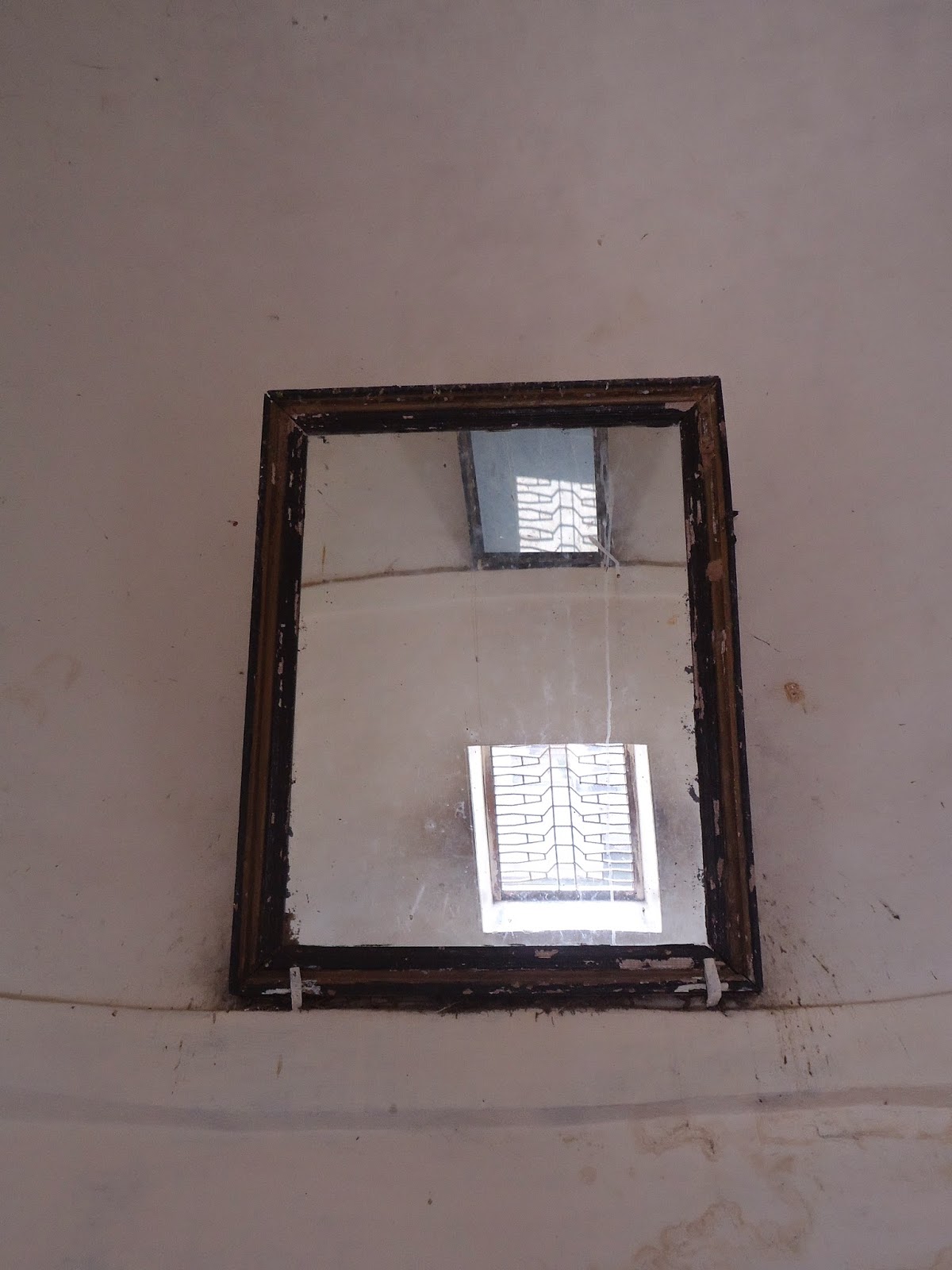 Just to be sure, she would be well out of his reach -- sitting in a special pavillion in the middle of a lotus pool. :-) 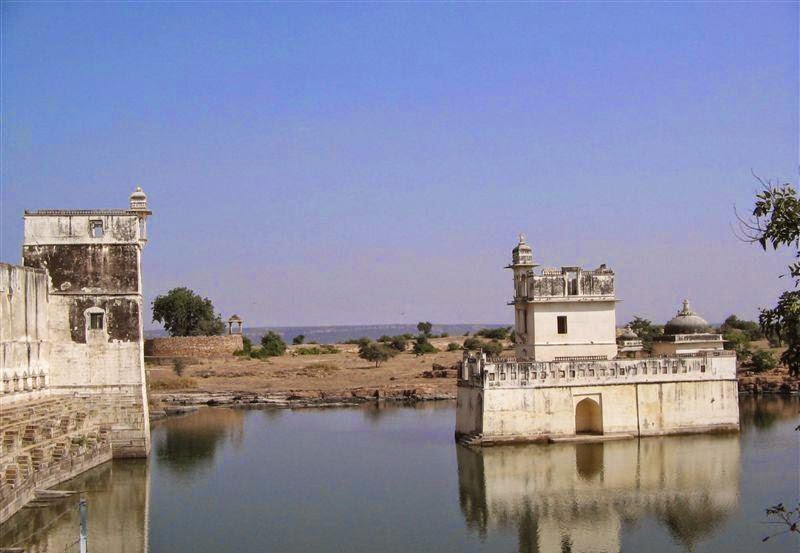 It's amazing to see the pavillion & pool. ......one wonders what is fact & what is fiction. 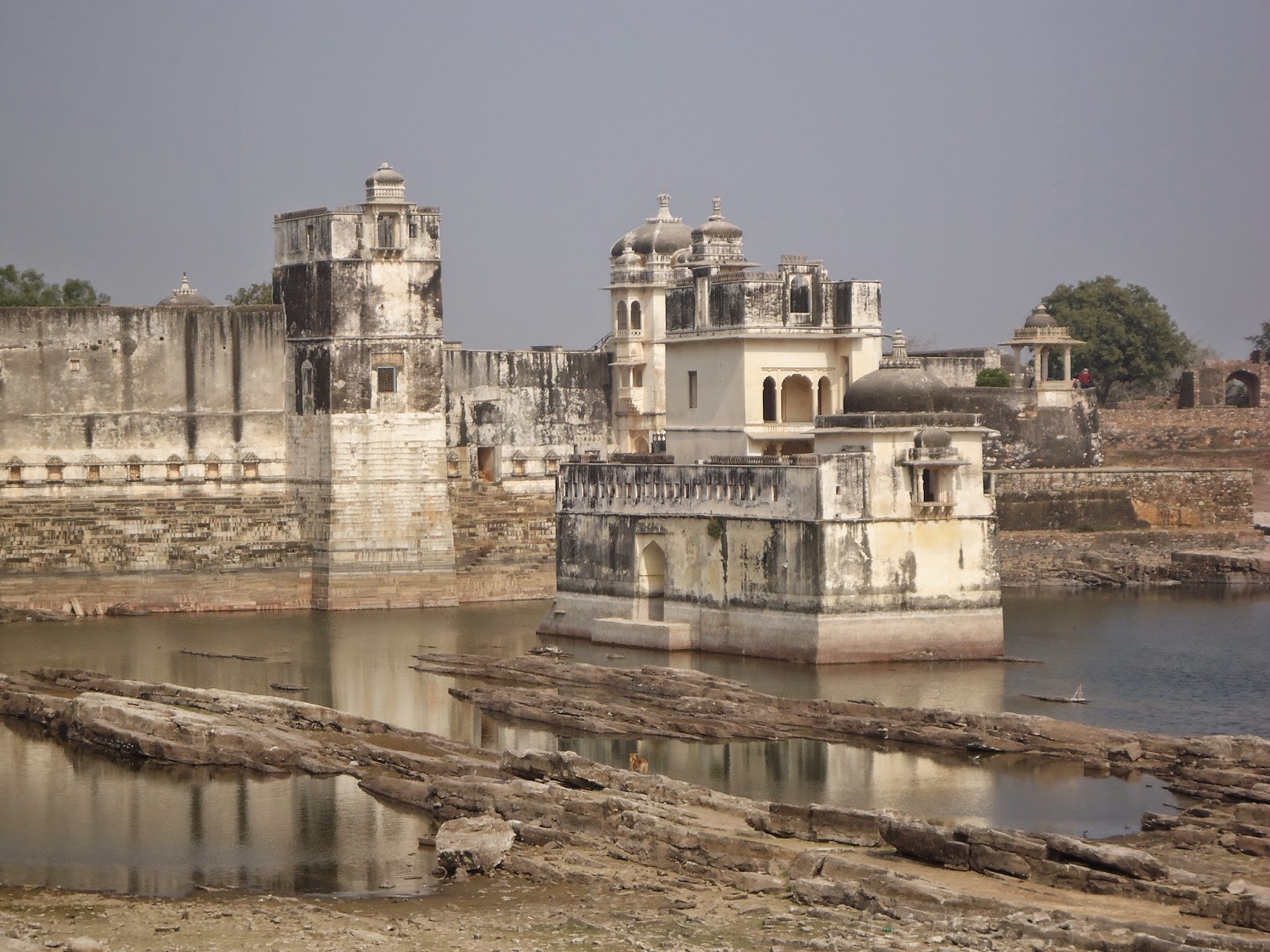 One glimpse was all that was needed to convince the sultan to destroy the whole city in order to
possess Padmini. (He was probably also carrying out a survey of the castle's defences while inside).

It appears that the sultan managed to convince King Ratan to accompany him back to Delhi. Maybe his was a condition for lifting the seige ?? Anyway, looks like Khilji tricked him, for once they were outside the walls, the sultan declared  the King of Chittorgah hostage. (Well, what can you expect from a man who kills his own uncle). The ransom for this safe return was none other that Padmini herself. 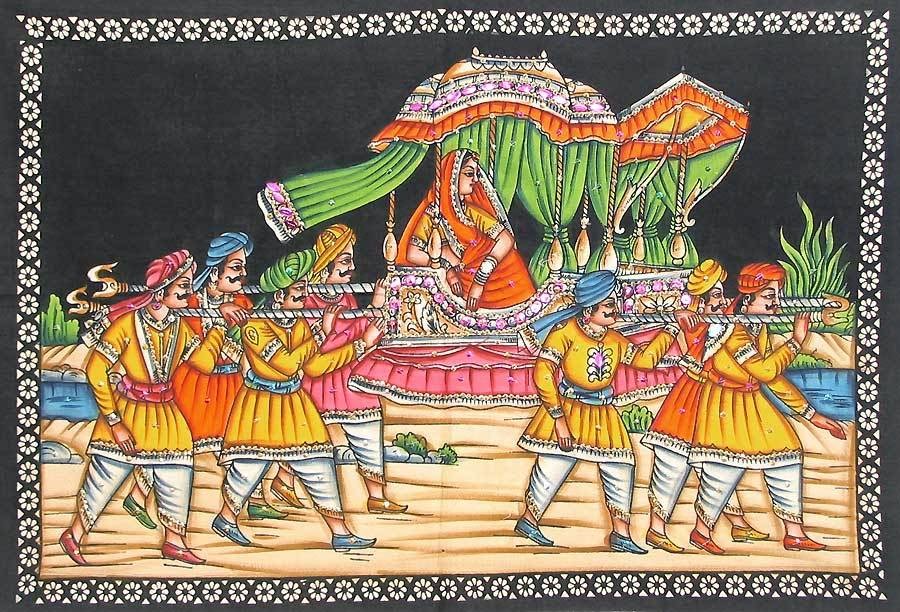 The palanquin was the prefered method of travel for royal ladies.

On hearing this news, rather than submit to the Sultan, Ratan Singh's generals, Gora and Badal, decided to trick Khilj. They told him that Padmini would be sent the following morning in a palanquin. At daybreak 150 palanquins left Chittorgarh. This was not unusual for a lady of her standing. As the palanquins went past the tent in which King Ratan Singh was being held captive, they stopped and out came armed soldiers who freed the king.
.... Sounds very much like a Trojan horse story. :-)
It's recorded that General Gora died during this skirmish. (he laid down his life for his king). The second general, Badal, survived.

The Sultan was of course furious. The city was surrounded. This time there would be no mercy.

Chittorgarh's troops were heavily outnumbered. Supplies to the city were cut. Rather than slowly starve to death or be eventually invaded, the women of the city chose mass suicide ( by fire.. called jauhar).

The men then rode out to face their enemy. They bravely fought, but were outnumbered and all perished against the Sultan's army. These were brutal times.

So the Sultan never did get get his way with Padmini. She died a horrible way, but preserved her honour. 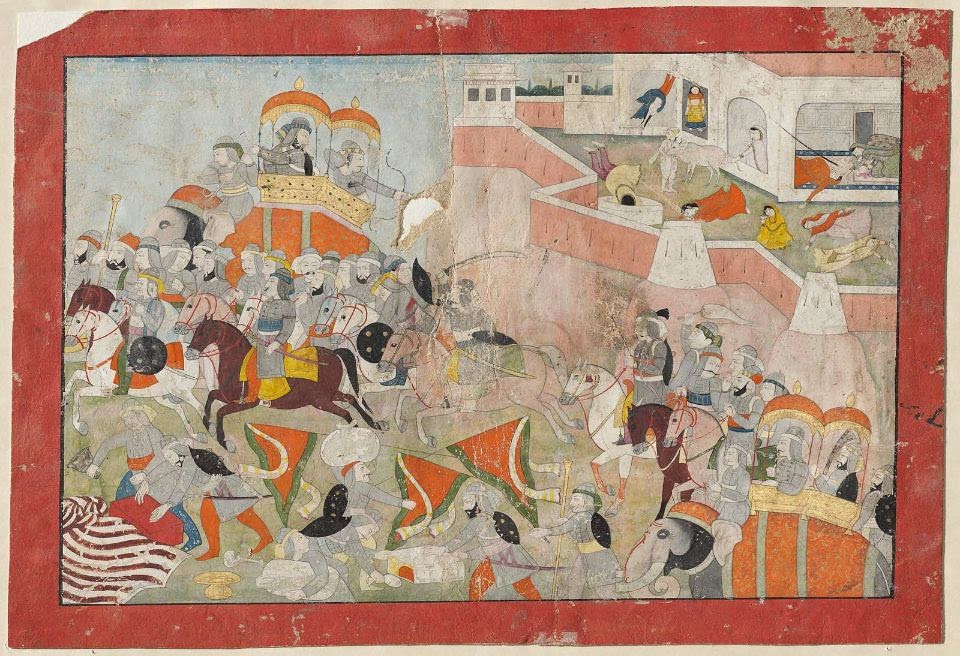 A rather grim end! The practice of mass suicide carried out in medieval times by Rajput women to save their honor from invaders.seems to have occured on numerous occasions. Their alternative was most likely slavery, rape and death.