The Citadel of Salah Ed-Din (Arabic: قلعة صلاح الدين‎, Qal'at Salah al-Din) are the remains of a castle in Syria. I visited the site in 2000. It's inaccessible now due to the current war
I wonder what it looks like now? Probably still a ruin. 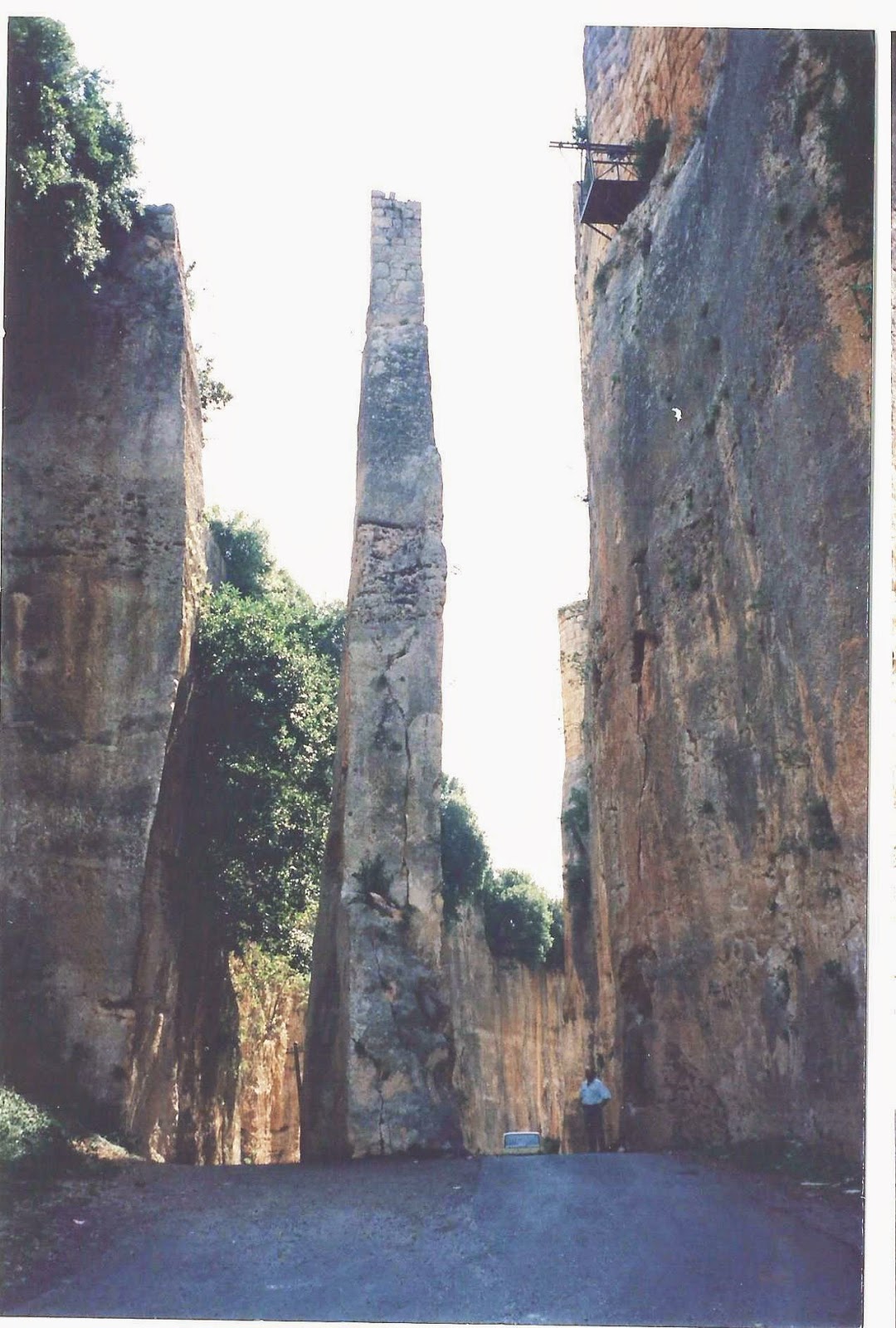 This lonely pillar was carved out of the surrounding bedrock in the 11th century.
It's the support for the drawbridge.

It's a crusader castle ruin. In 1188 it fell to the forces of Saladin after a three-day siege.
What's left are these ruins.

The site is beautiful. Situated in a deep ravine, it's surrounded by forest.
Built on a ridge some 700 metres (2,300 ft) long between two deep gorges.[2] It guarded the route between Latakia and the city of Antioch

In 2006, the castles of Qal'at Salah El-Din and Krak des Chevaliers was recognised as a World Heritage Site by UNESCO.

The spur on which the castle is built is connected to a plateau in the east. 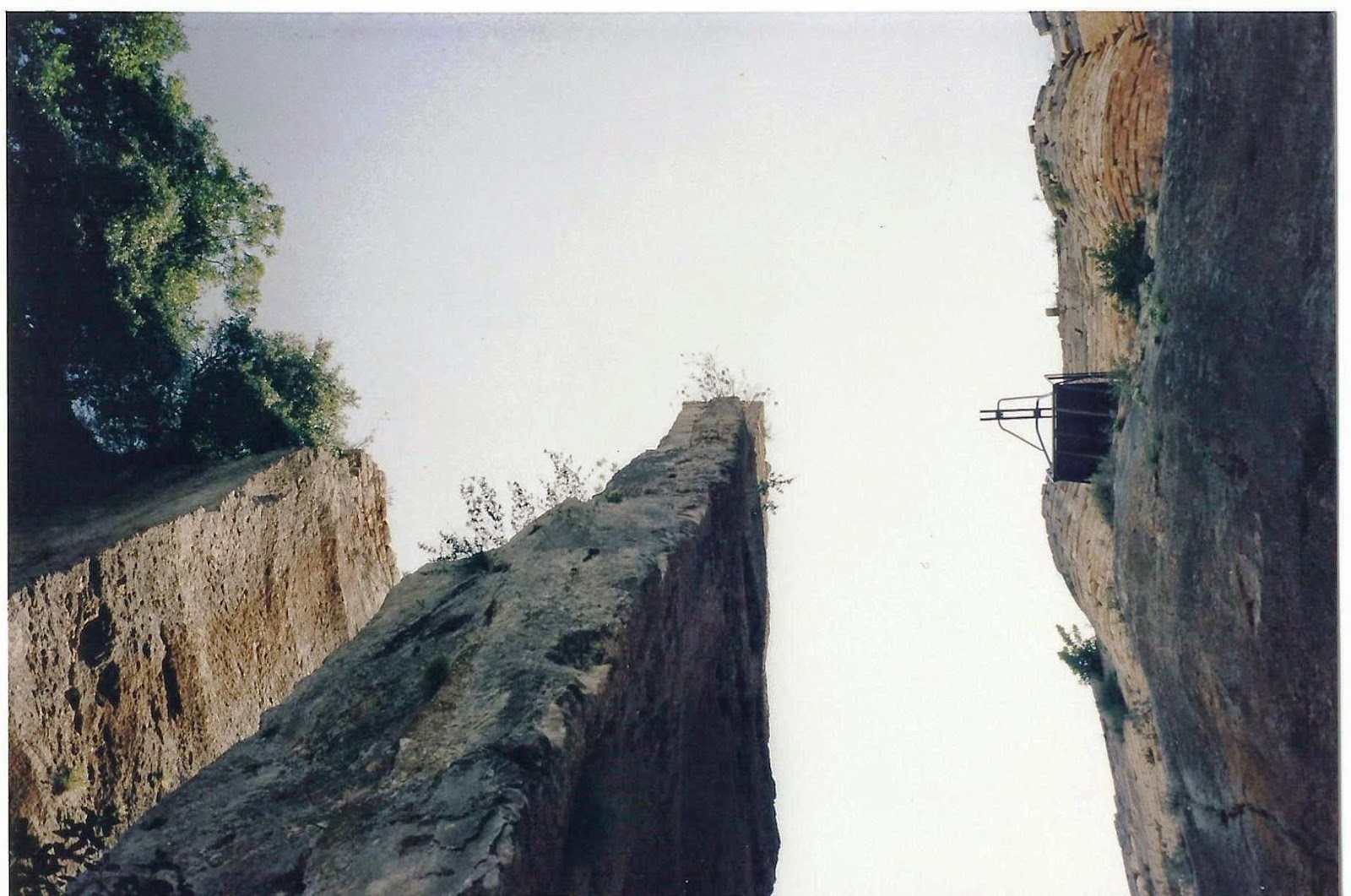 It was part of the Principality of Antioch, one of the four states founded by the Crusaders after the First Crusade captured Jerusalem in 1099. 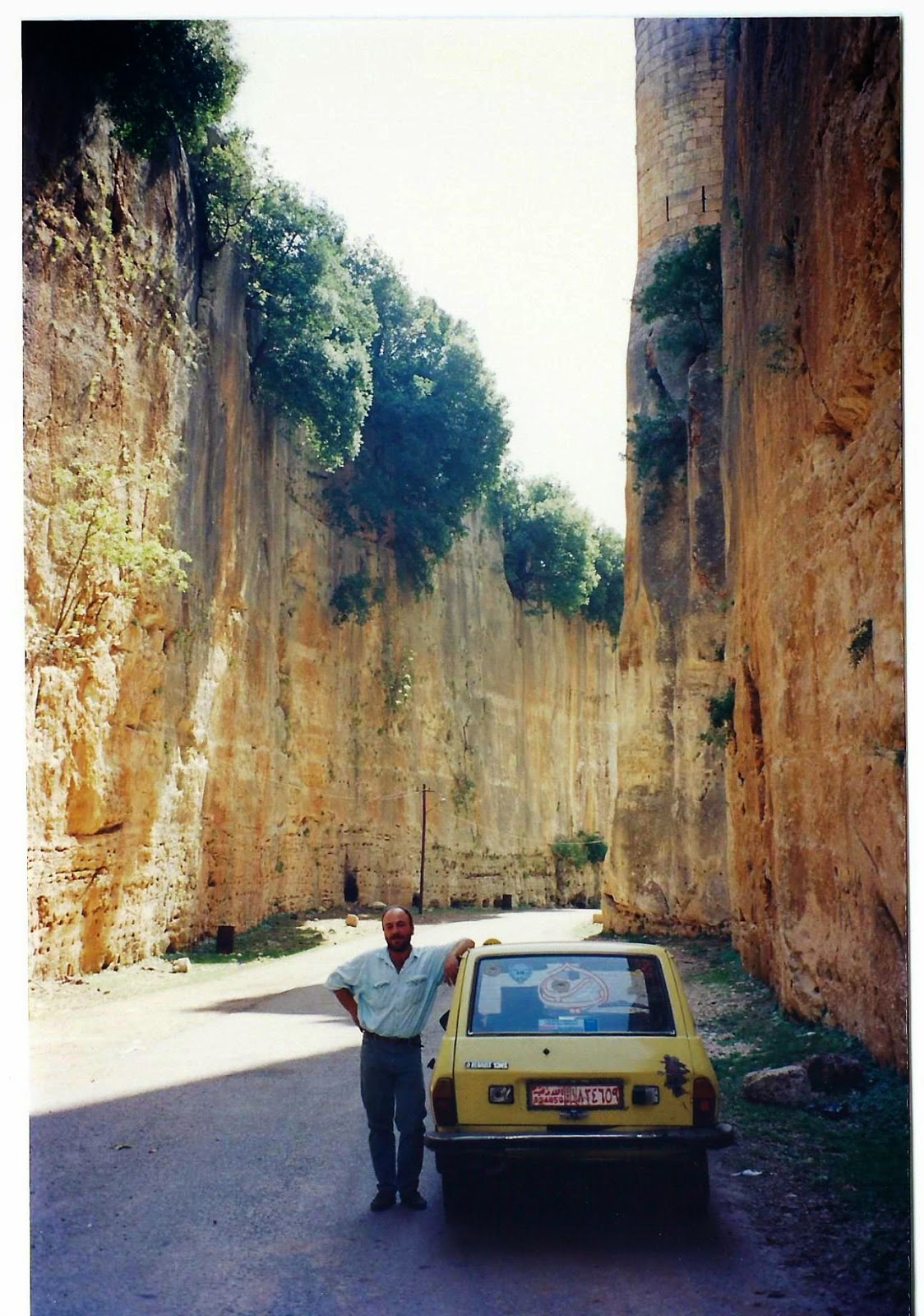 My taxi driver & his trusty Peugot.
The car is parked in the man made trench build by the crusaders which surrounds the site. 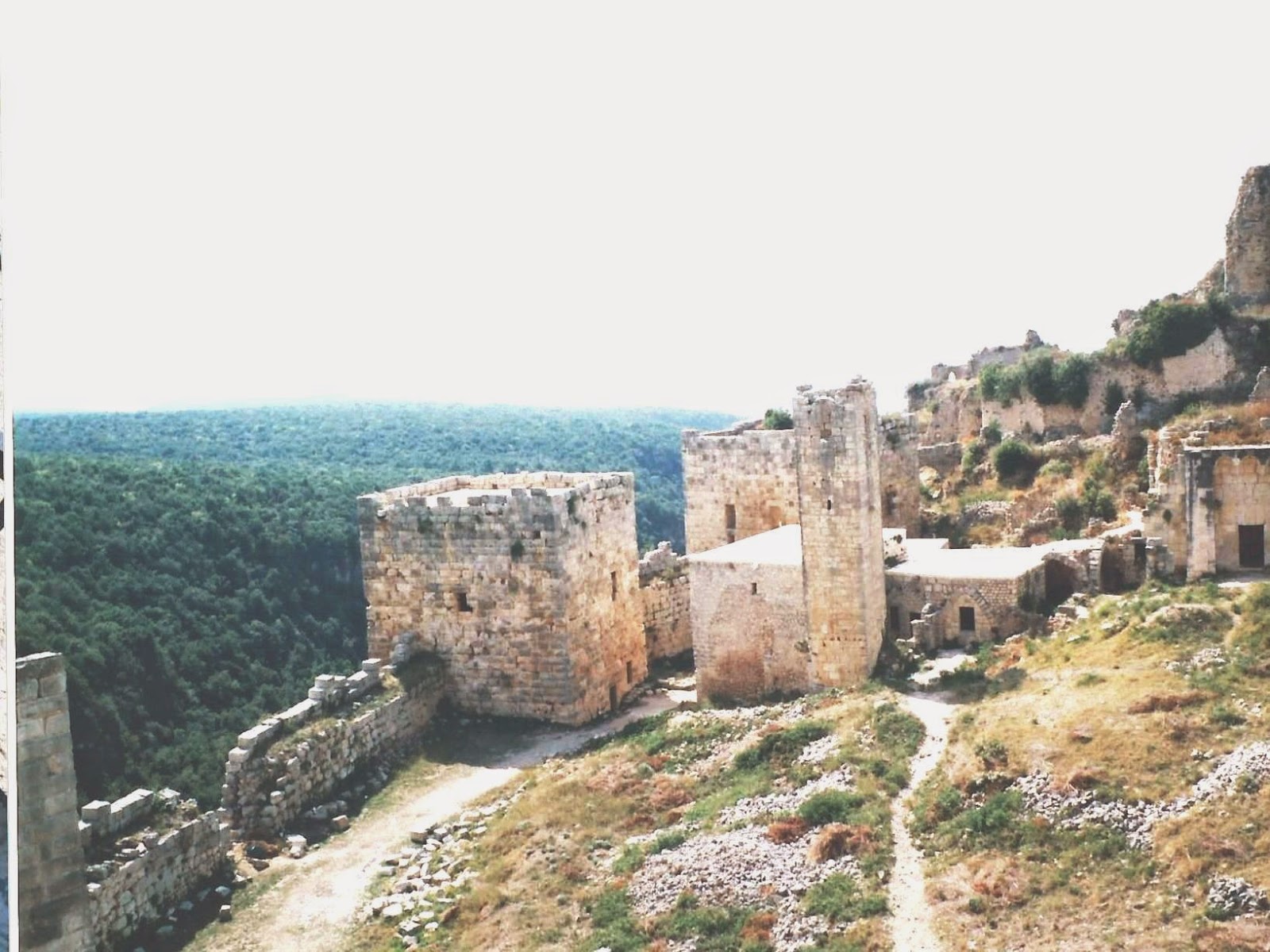 
On 27 July 1188 Saladin and his son, Az-Zahir Ghazi, arrived at Saône with an army and laid siege to the castle. The Muslim forces adopted two positions outside the castle: 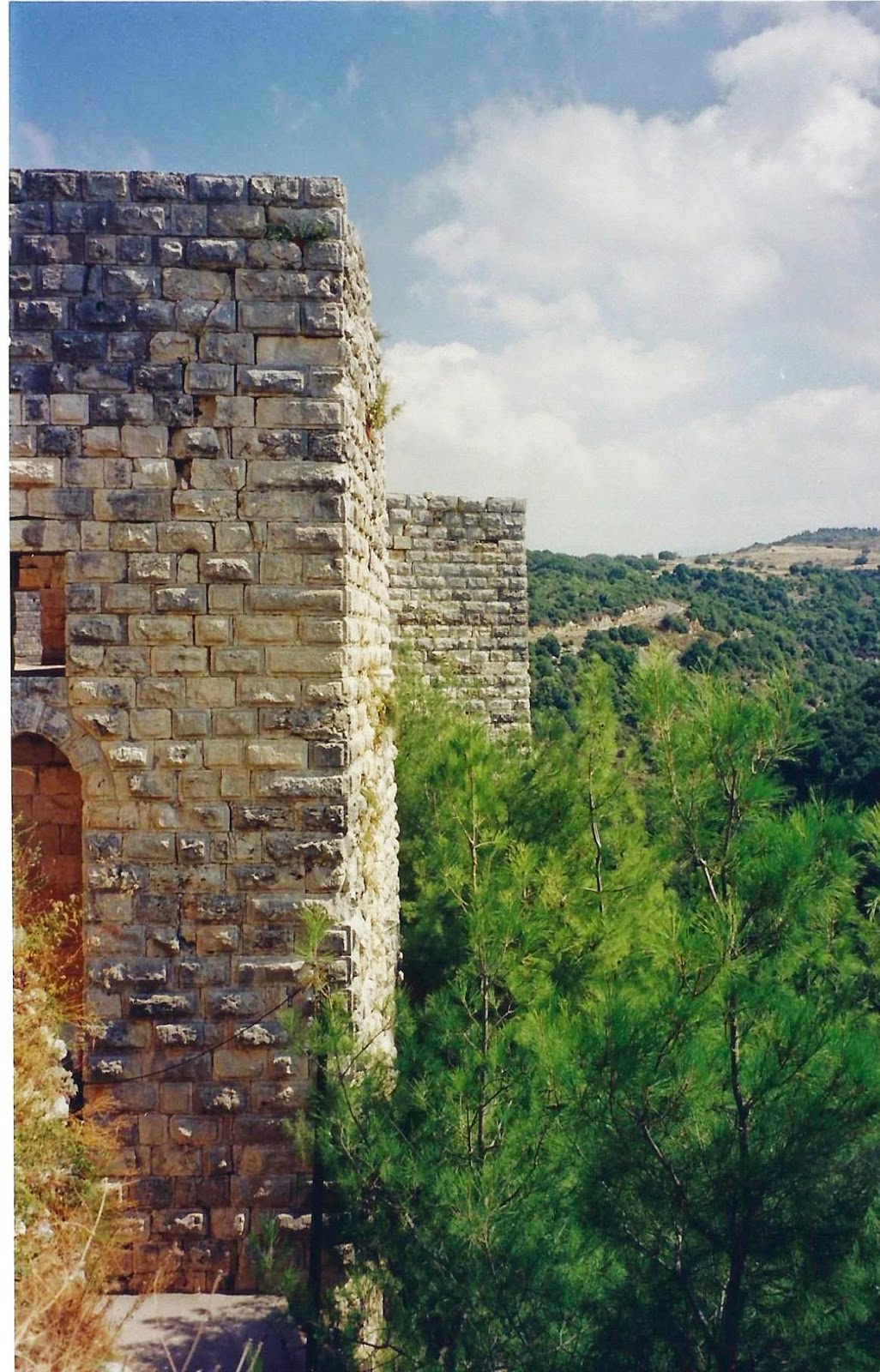 Saladin was positioned on the plateau opposite the castle's east side.  His son faced the north of the castle's lower enclosure. 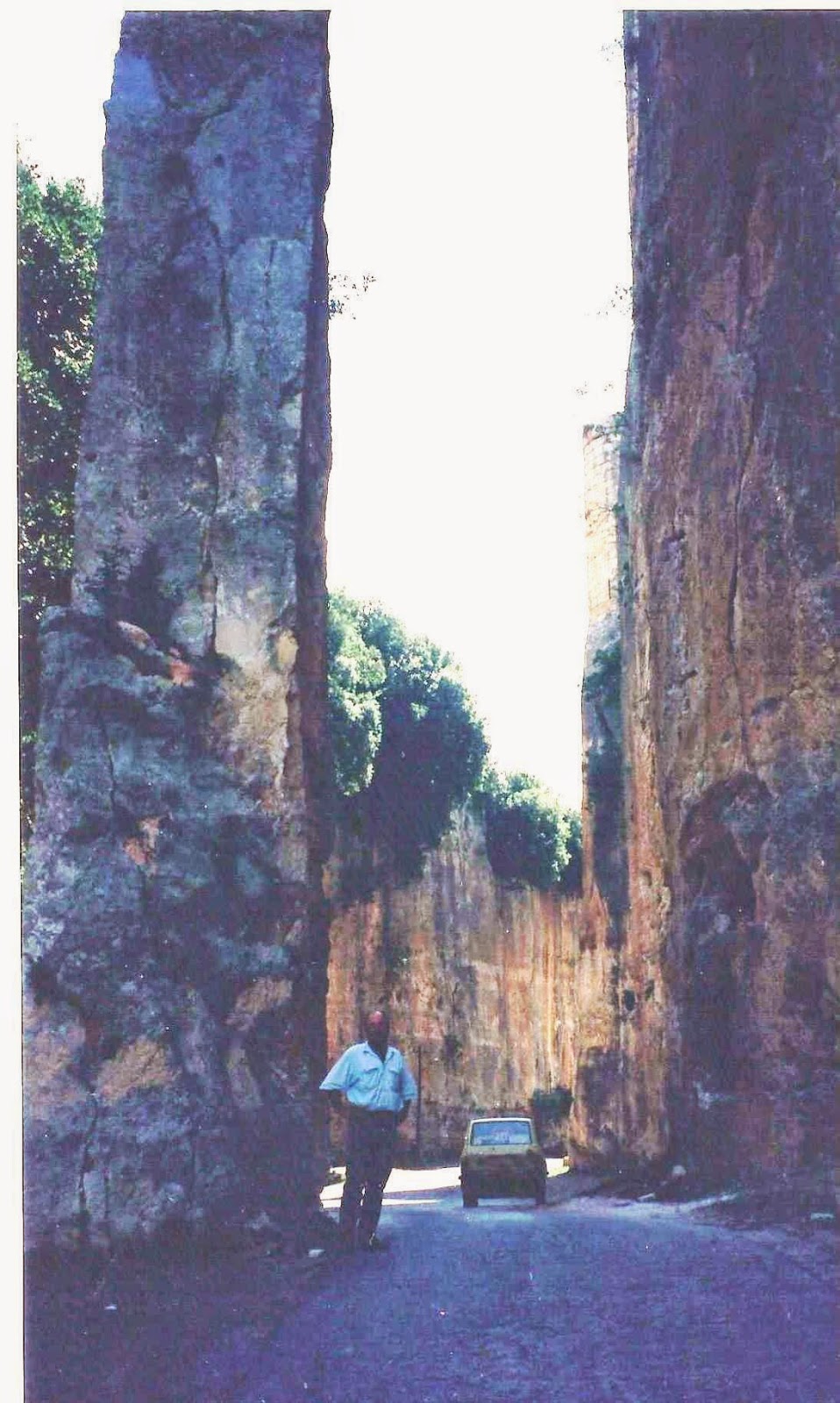 It is told that the seige engines hurled stones weighing between 50 and 300 kilograms (110 and 660 lb) This onslaught lasted two days, causing significant damage. 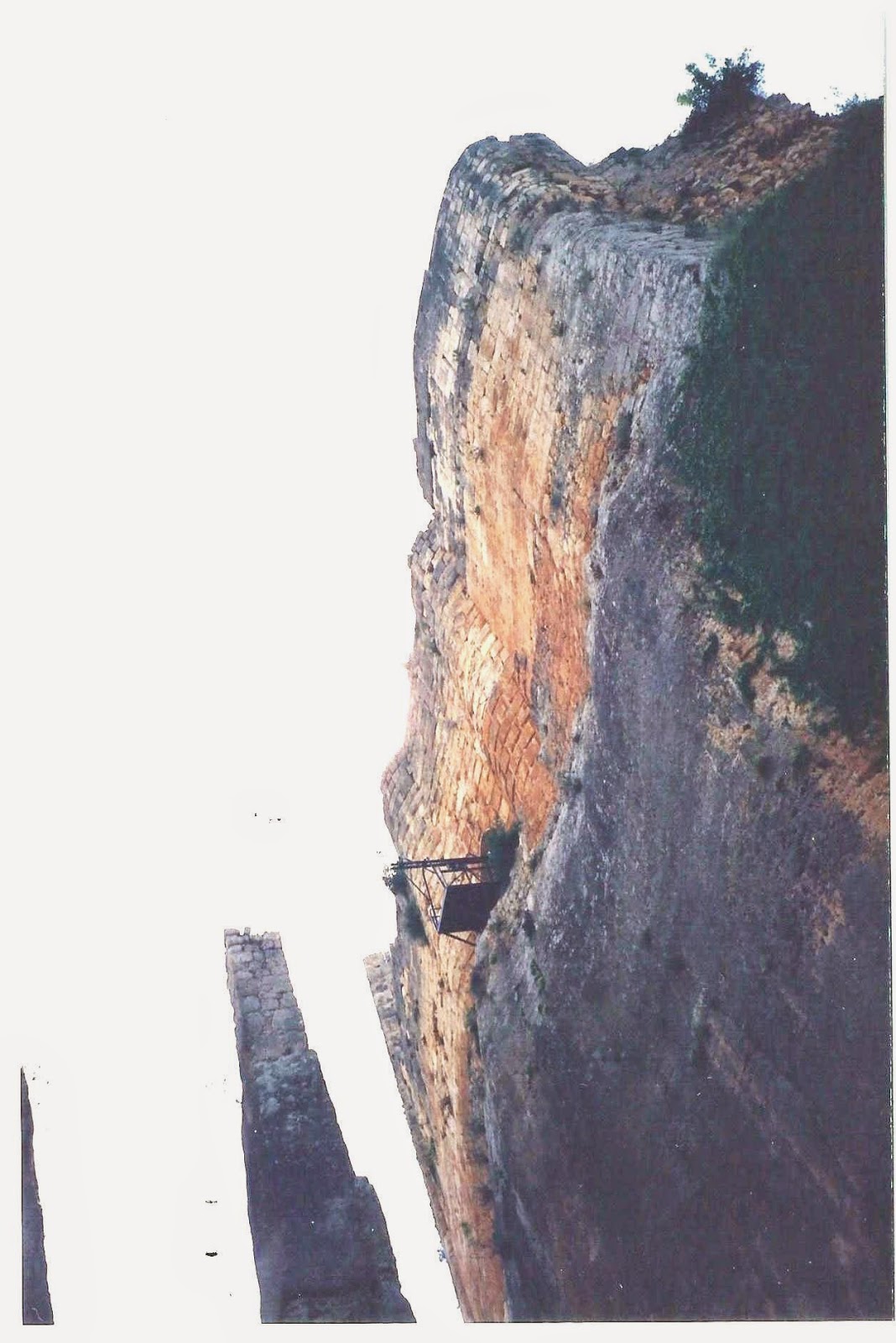 The stone "needle" is 28 metres tall 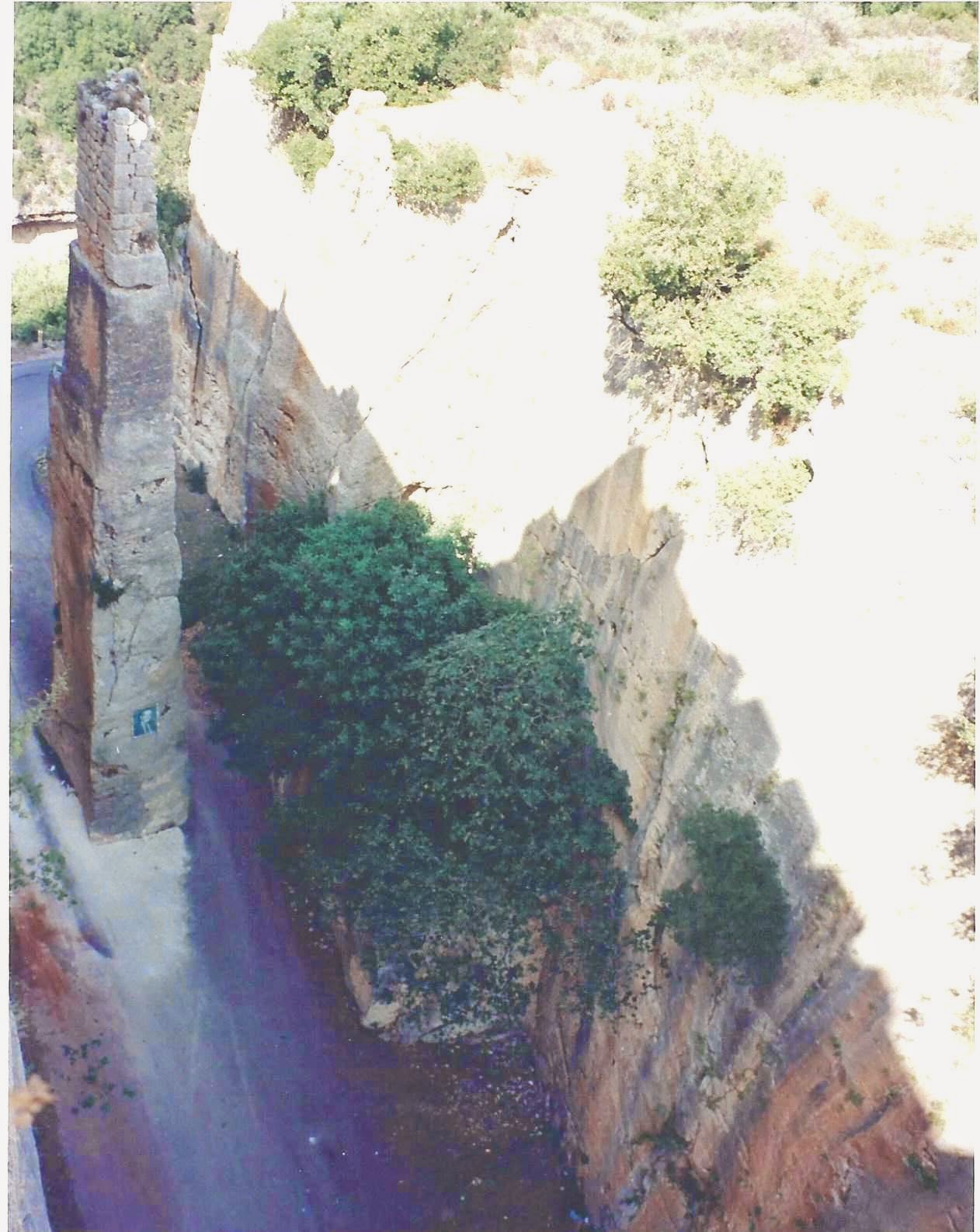 The 28 m deep ditch, cut into the living rock 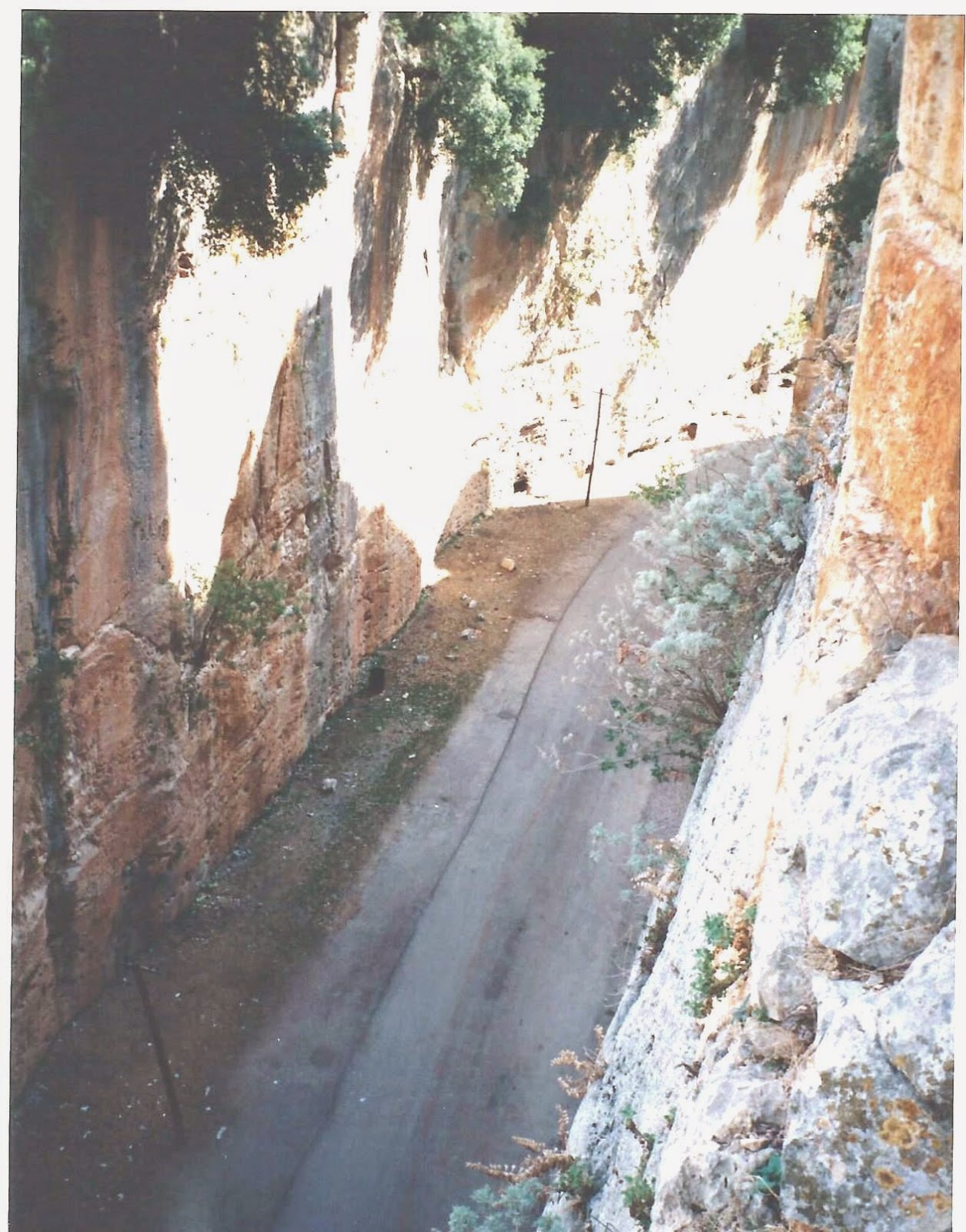 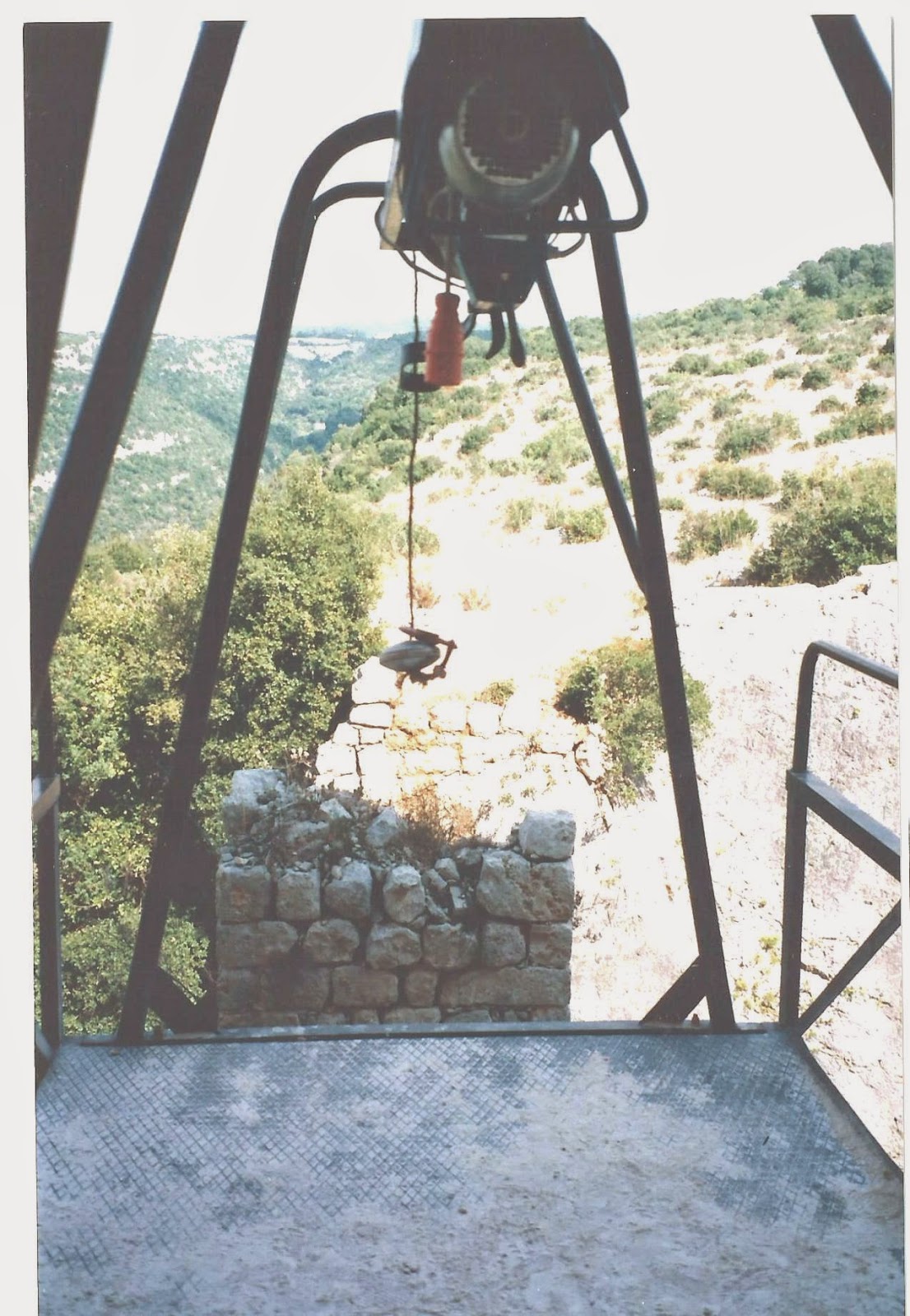 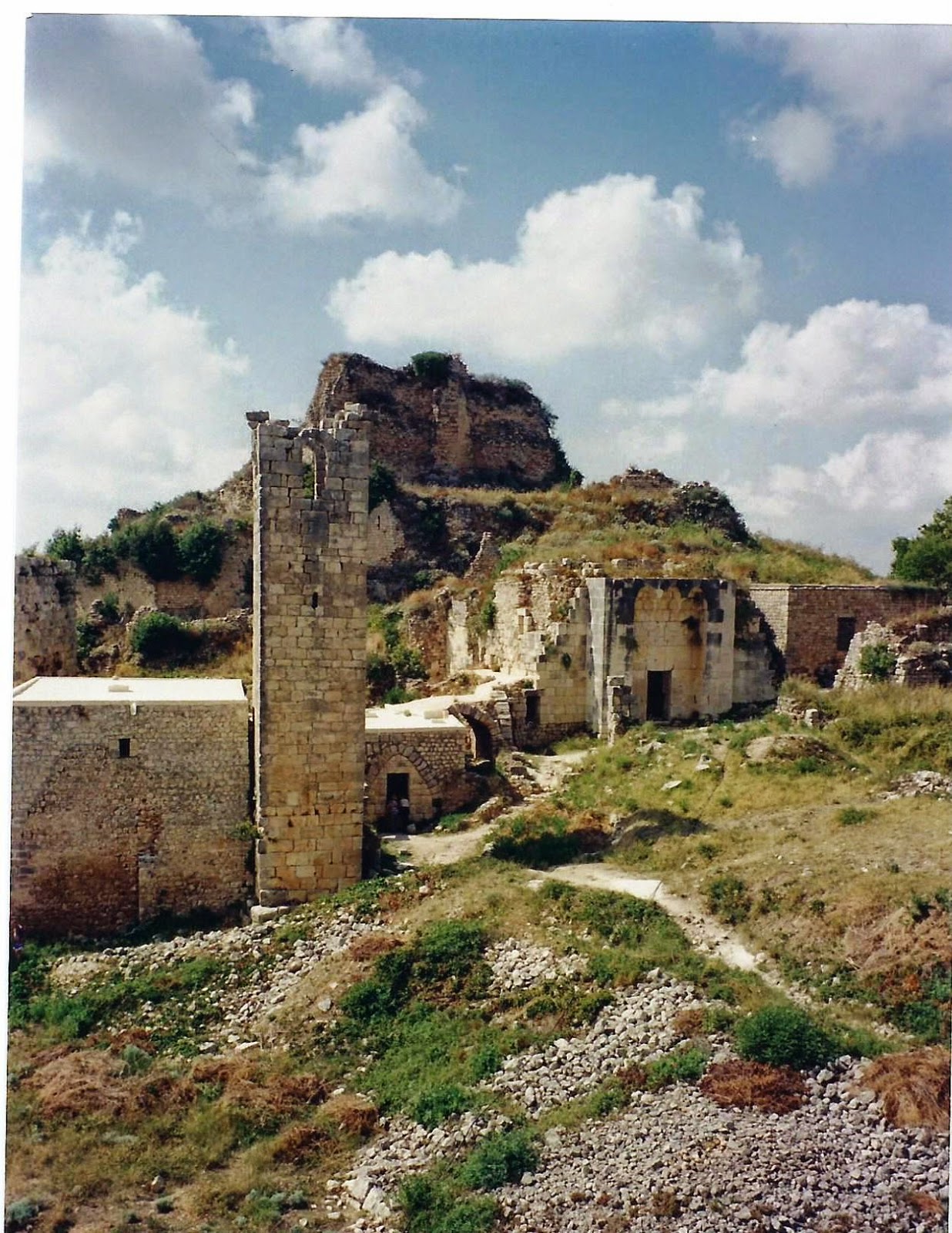