This is a Pre-Columbian archaeological site in western Bolivia.
It was discovered in 1549 by Spanish conquistador Pedro Cieza de León.
It's near Lake Titicata. 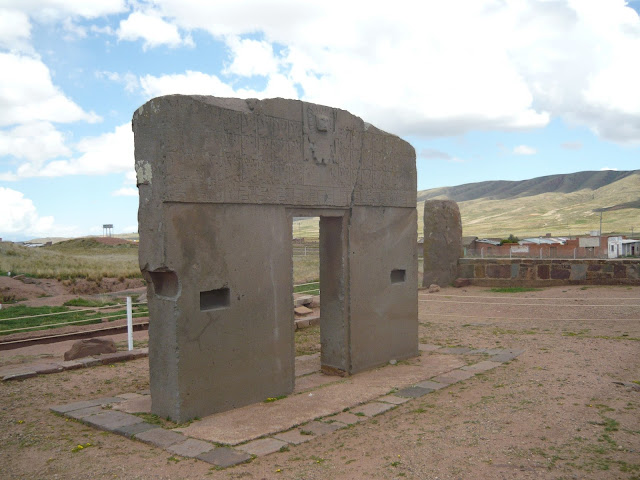 The Gate of the Sun. This megalithic solid stone arch is constructed from a single piece of stone. The weight is estimated to be 10 tons. The inscriptions found on the object are mysterious. They are believed to be either of astronomical and/or astrological significance.
The Gateway is 2.8 metres high and 3.8 metres wide. 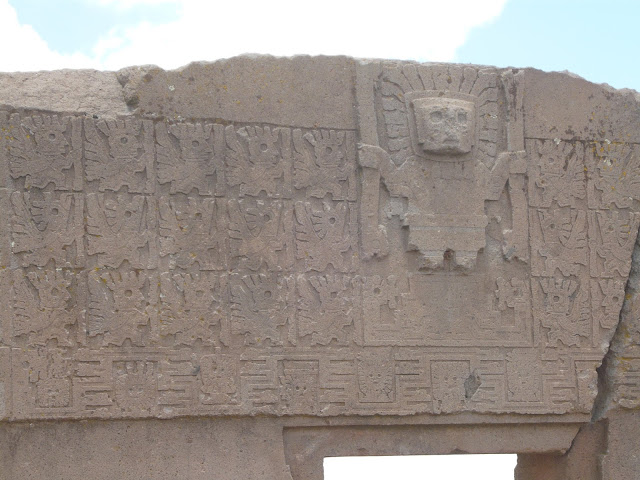 The lintel is carved with 48 squares surrounding a central figure. Each square represents a character in the form of winged effigy. There are 32 effigies with human faces and 16 with condors' heads. All look to the central motif: the figure of a man with his head surrounded by 24 linear rays that may represent rays of the sun.
Some historians and archaeologists believe that the central figure represents the “Sun God”, while others have linked it with the Inca god Viracocha.
(Wikipedia). 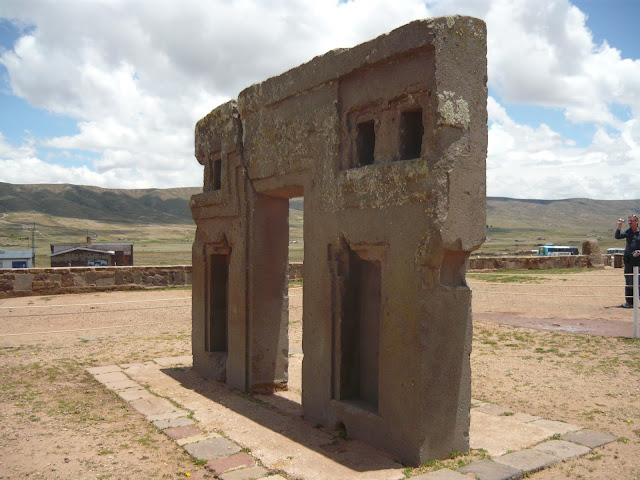 Most archieologists appear to date the site to around 300BC to AD 300.
The area around Tiwanaku may have been inhabited as early as 1500 BC. 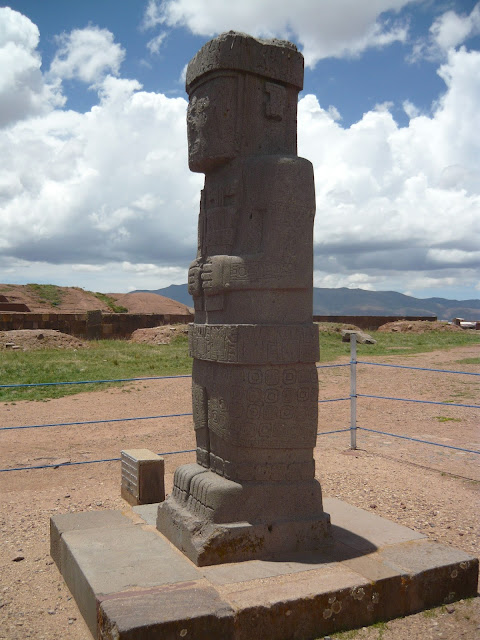 Such statues perhaps represented the race of stone giants which first populated the world in pan-Andean mythology. Gold pins and traces of piant indicate they were once clothed in textiles and decorated with bright colours. The statue is 3.5 metres tall and dates to c. 300 CE. 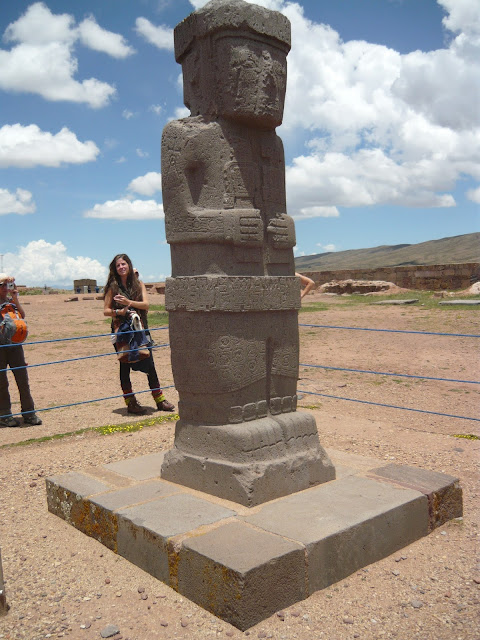 The figure holds a kero (qero) or tall beaker in one hand and a staff-like object, perhaps a sceptre or coca snuff tablet, in the other. 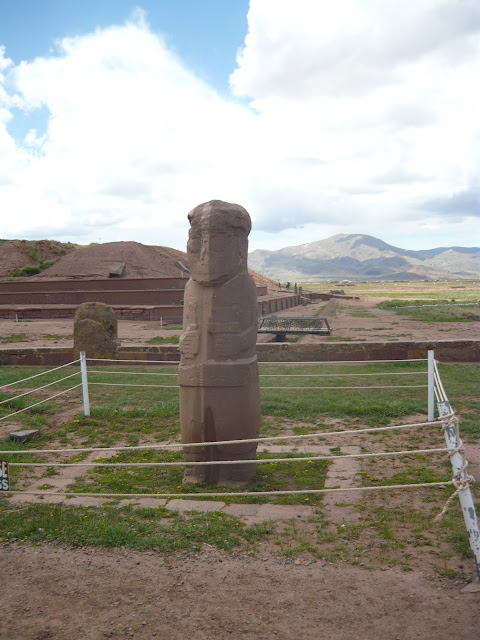 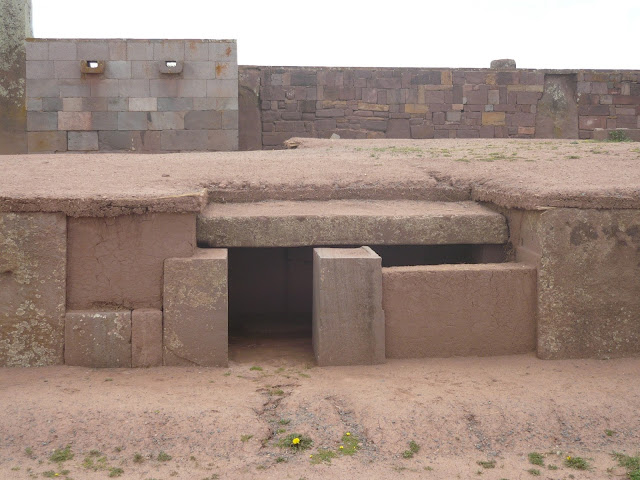 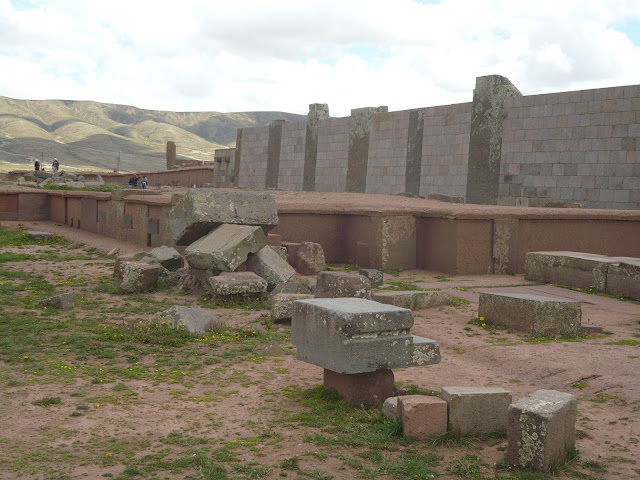 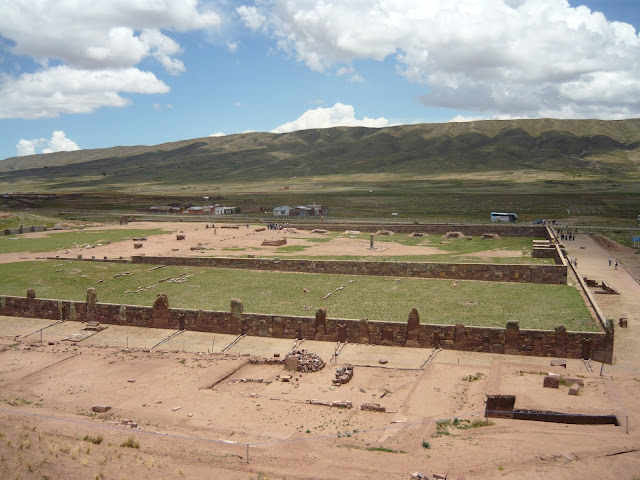 Kalasasaya, Tiwanaku. This walled compound of sandstone blocks creates a sacred space used for public and religious ceremonies. It measures 130 by 120 metres.   Standing in the precinct is the Ponce Monolith. 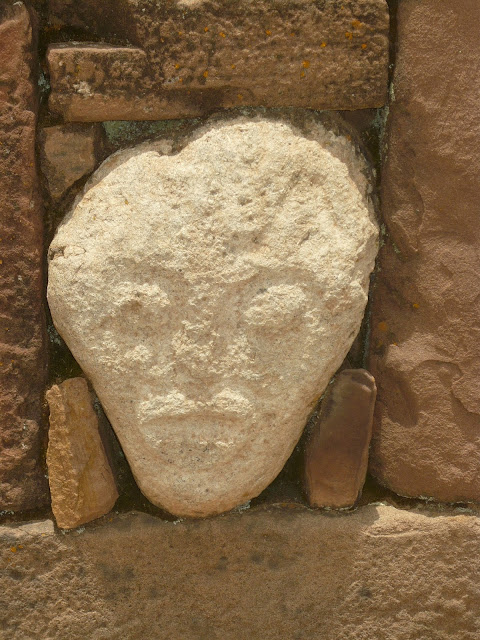 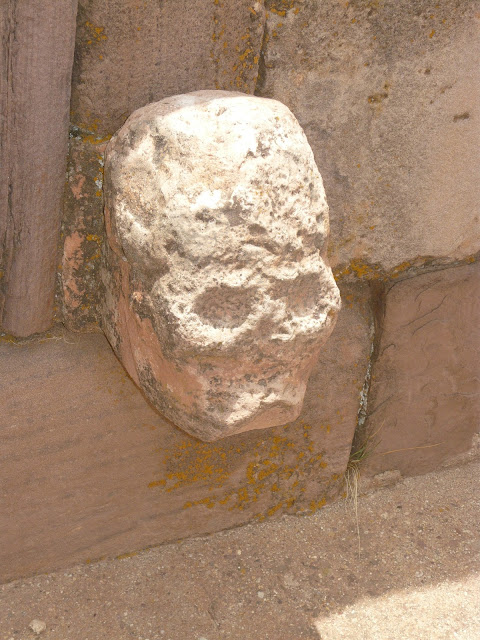 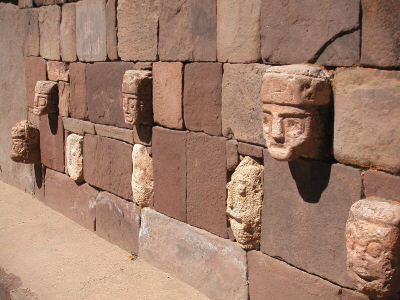 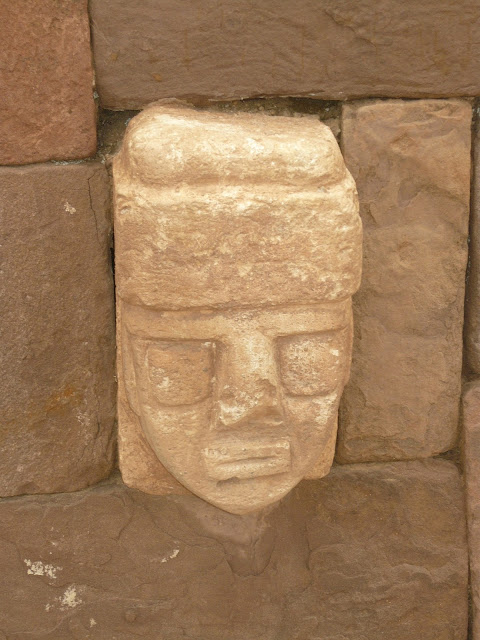 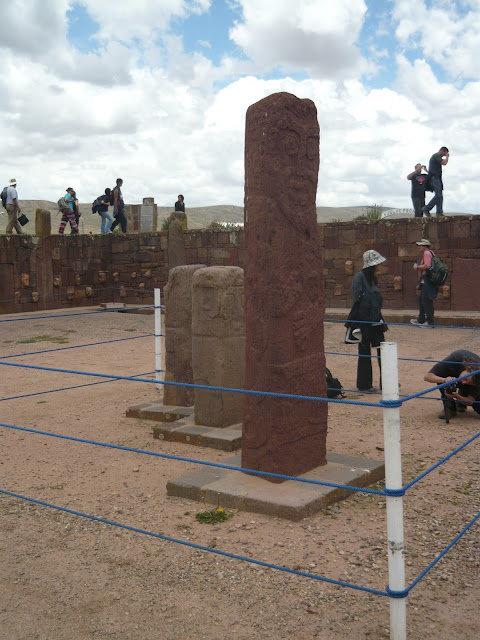 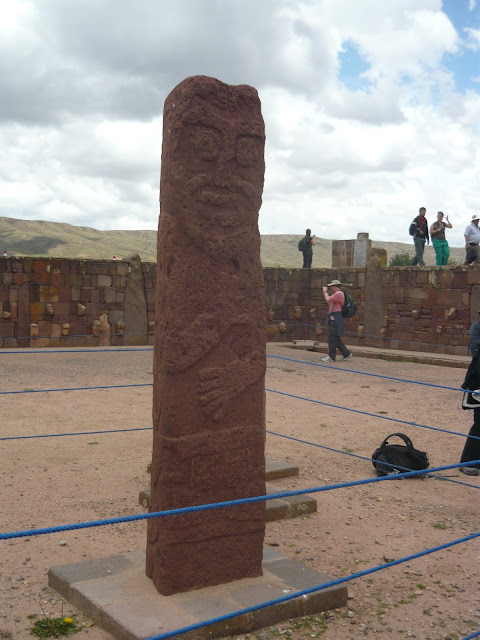 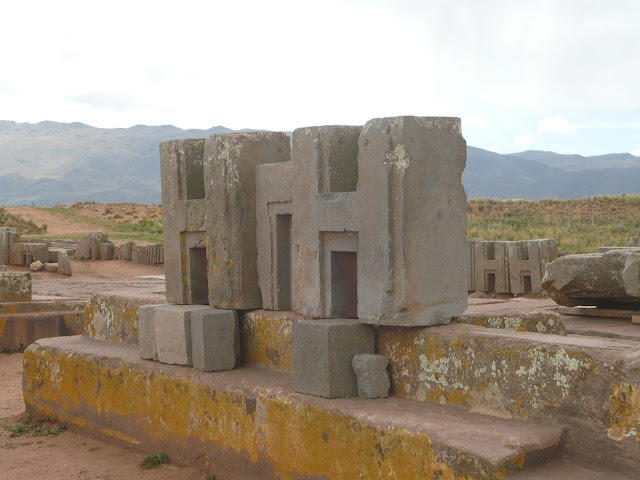 Kantatallita is one of the most destroyed ruins of Tiwanaku, where we see huge blocks of cut stone in great geometric detail. 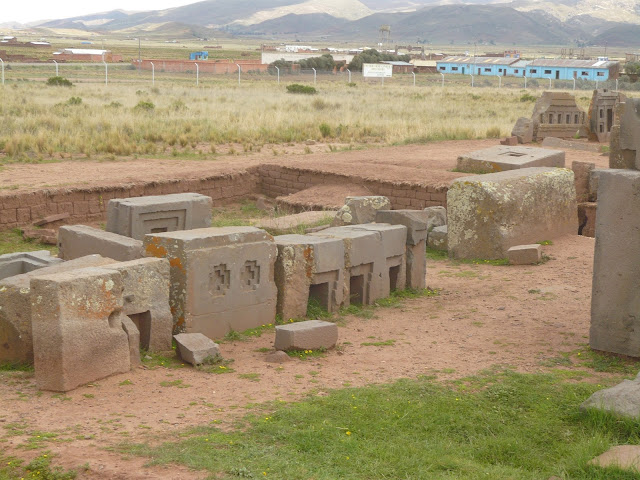 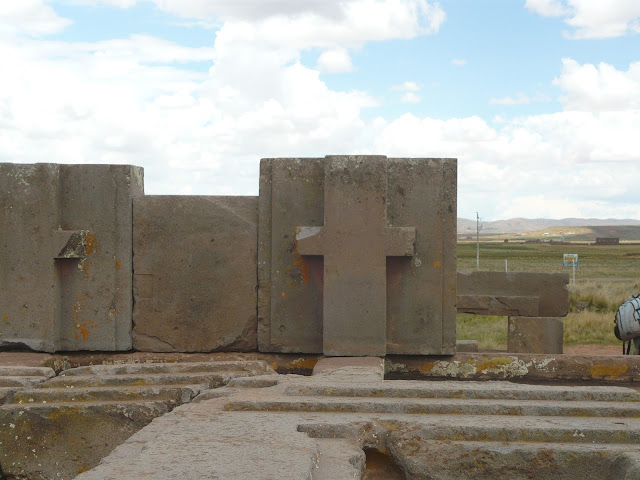 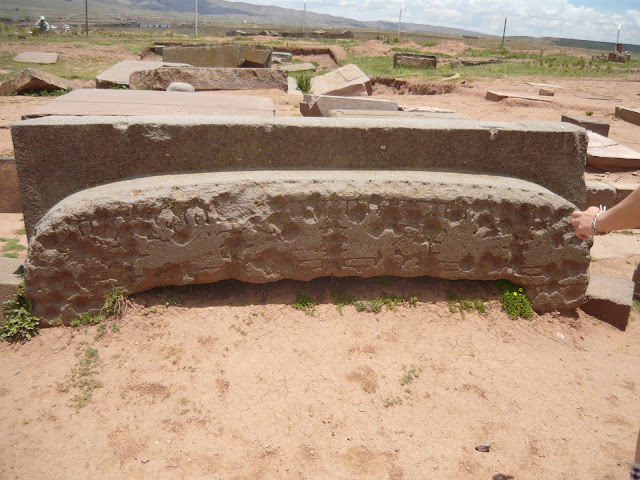 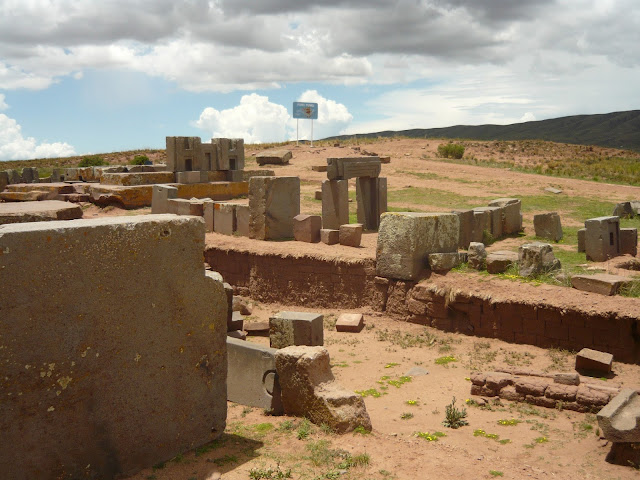