This site is the Tomb of I'timād-ud-Daula " the Treasurer of the Empire".
It's a Mughal mausoleum in the city of Agra (the Indian state of Uttar Pradesh).

Nur Jehan, the wife and queen of the Mughal Emperor Jahangir built this tomb for her father, Mirza Shiyath Beg. Soon after her marriage, Mirza was appointed Prime Minister & Treasurer.

Mirza must have done his job well as treasurer to have earn't this tribute. 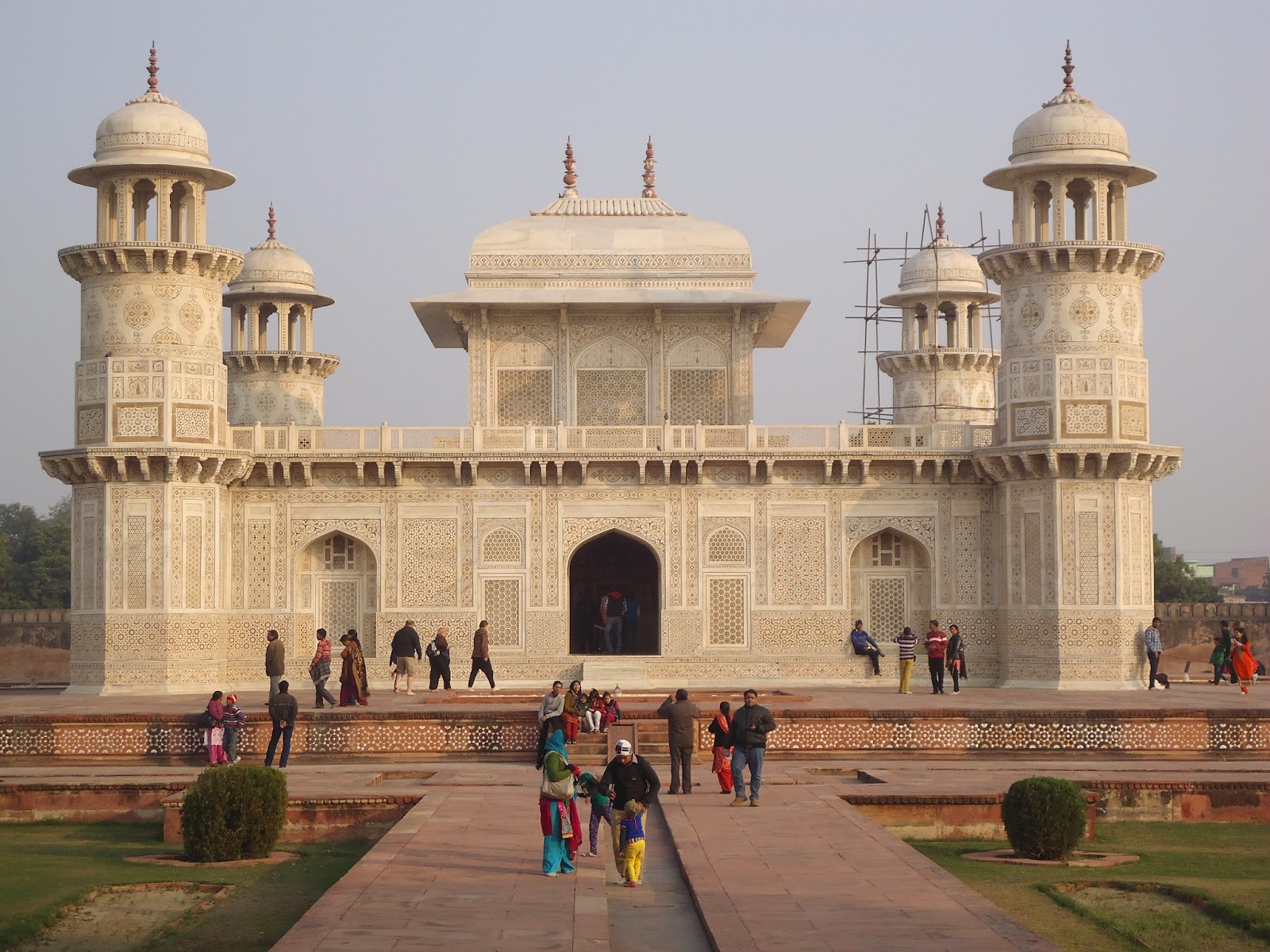 It's a jewel that most tourists miss in their rush to see the Taj Mahal which is only 6km away.

The tomb was built between 1622 and 1628. In the history of Indian architecture this site is very important. It marks the transition from the old monumental style of red sandstone with marble decoration (seen in the Humayun's Tomb in Delhi and Akbar's tomb in Sikandra) to structures built completely from white marble and pietra dura inlay (the pinnacle being the Taj Mahal). 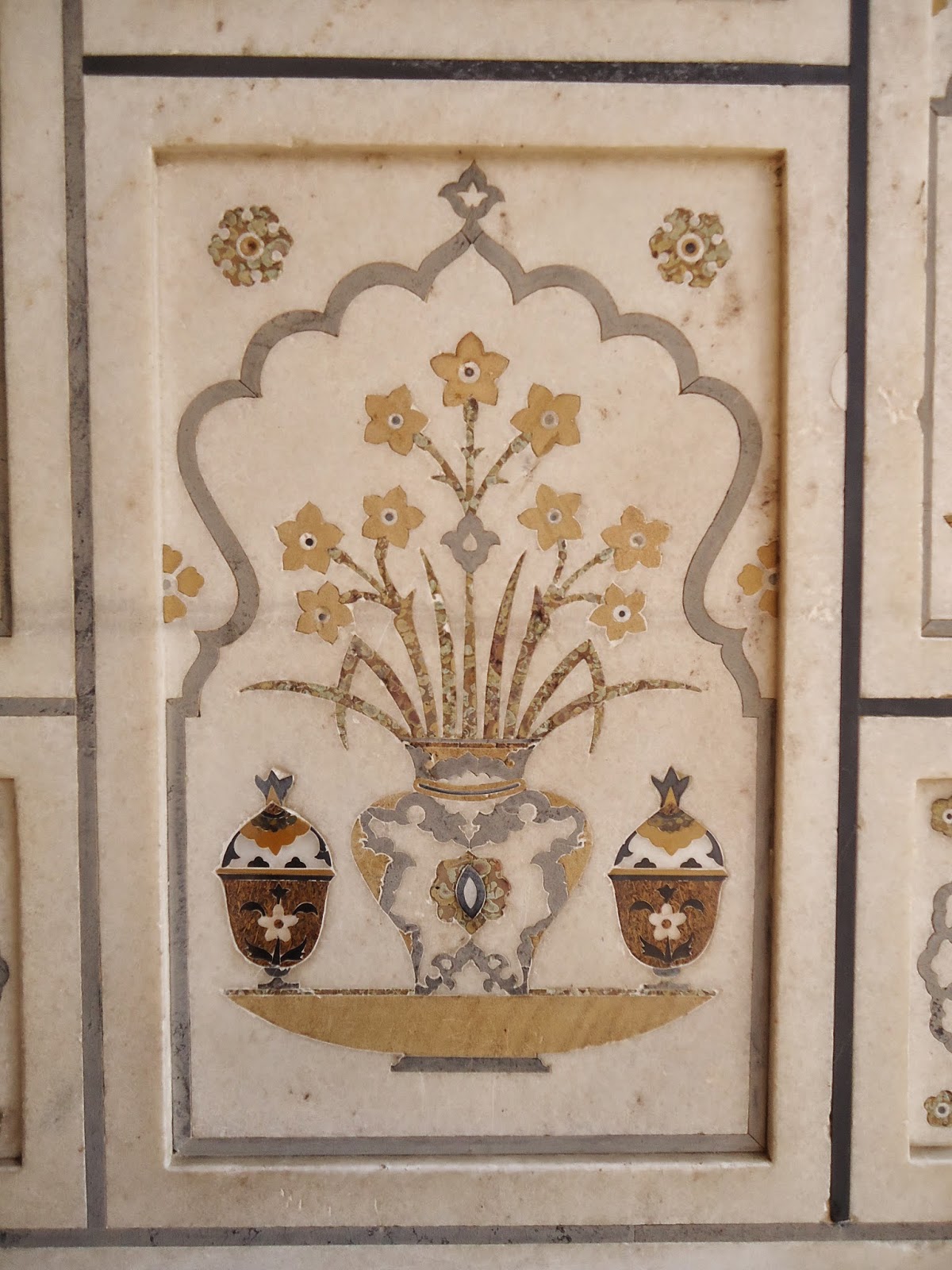 Pietra Dura or pietre dure is the art of stone inlay. The aim is to cut the stone so precisely that contacts between the edges are invisible. This art was made famous in Renaissance Italy, esp in Florence & Rome. 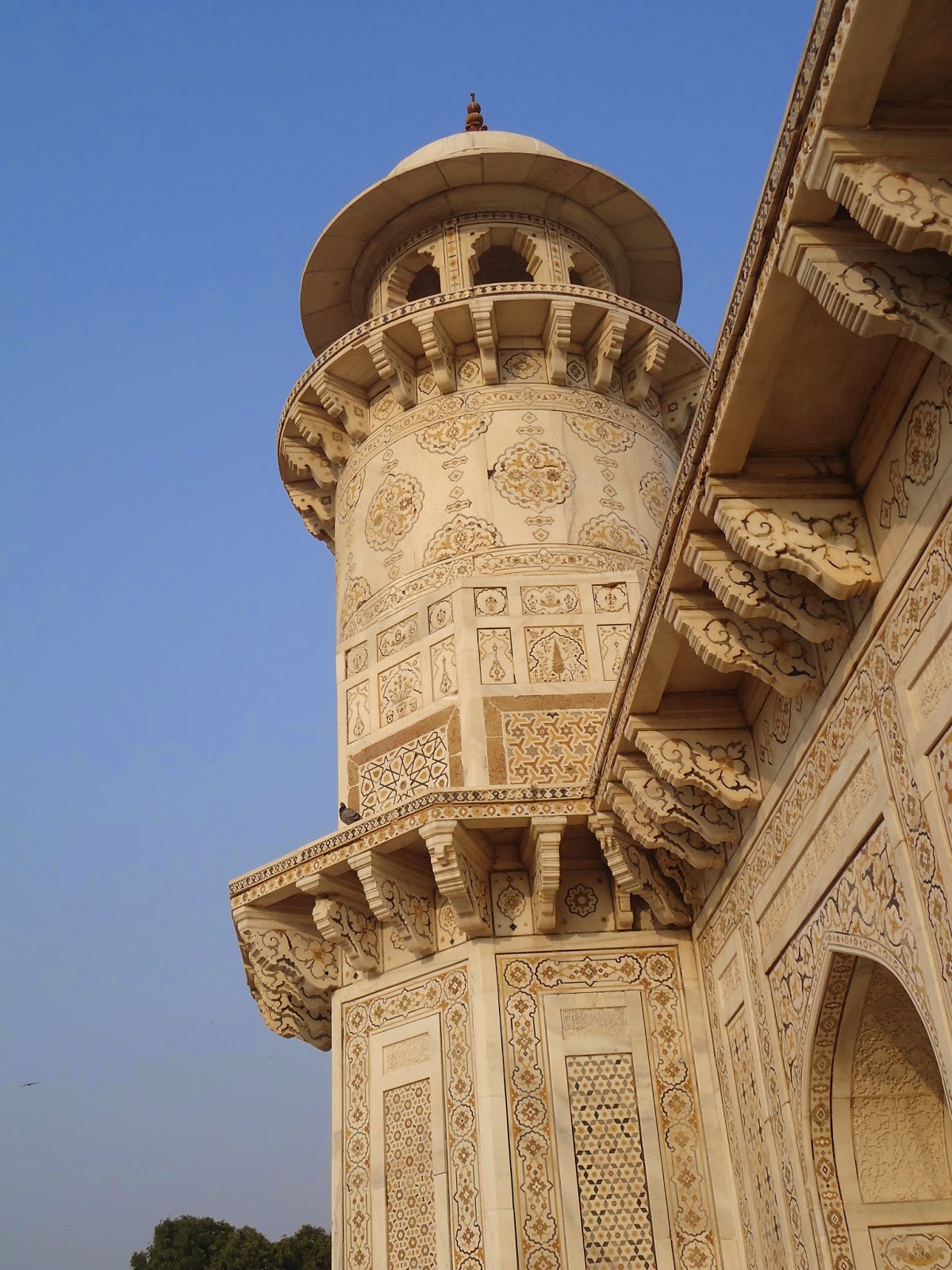 The walls of this site are completely constructed with white marble from Rajasthan. 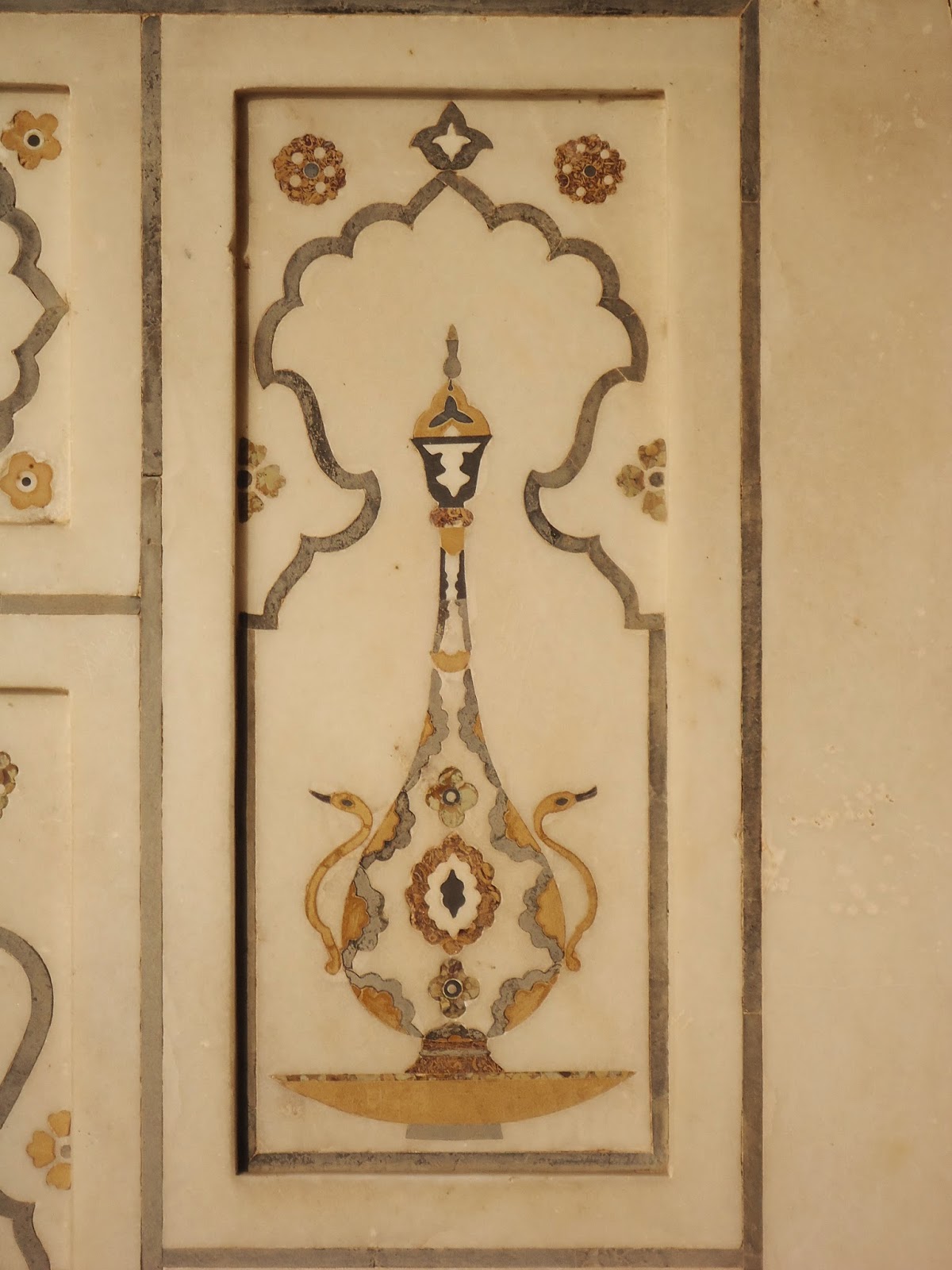 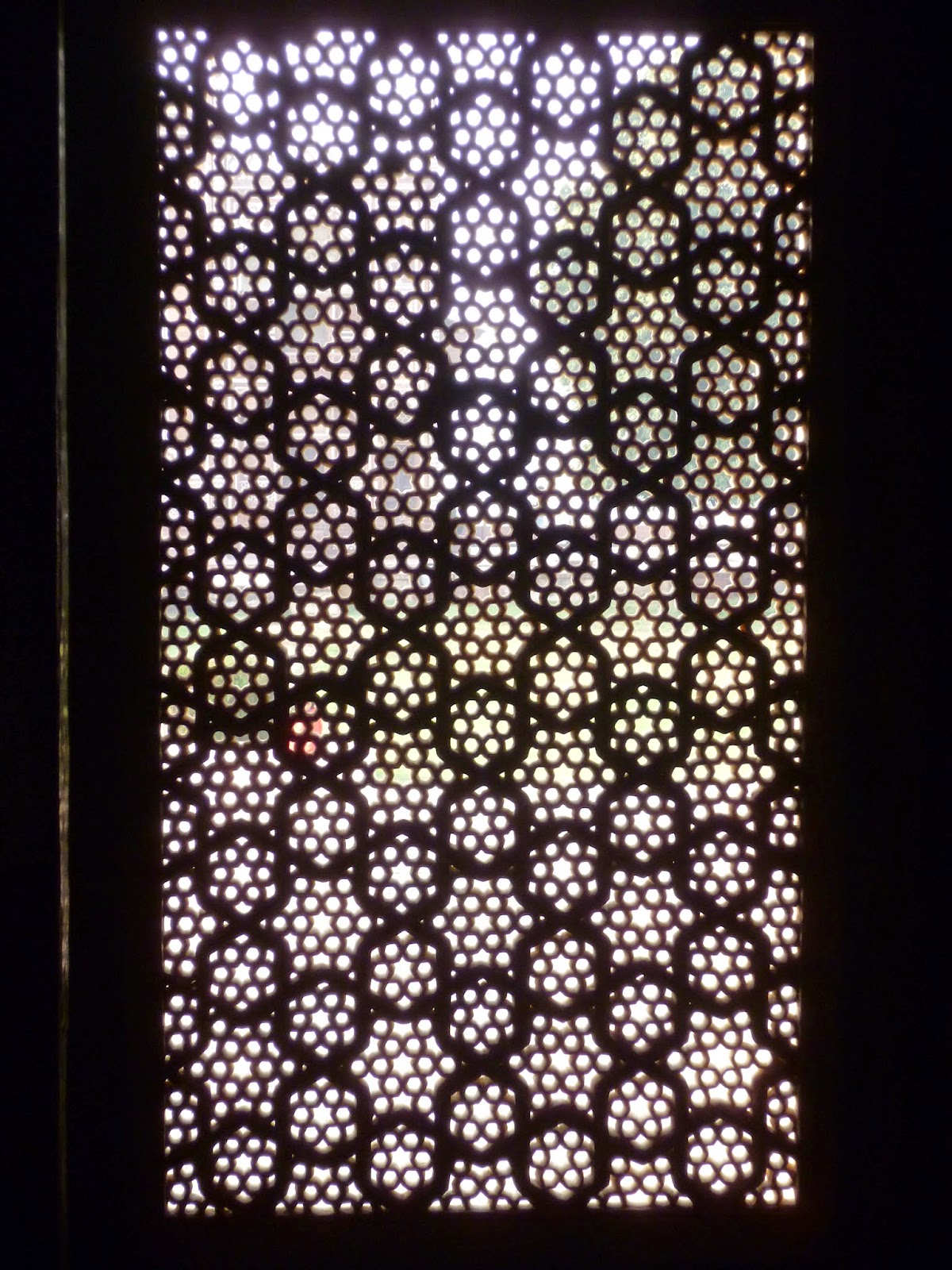 Many of its design elements can be found in the later Taj Mahal. These Islamic mausoleums are of great architectural interest. Notice firstly that the main tomb stands on a plinth on red sandstone.
The Tomb is square with octagonal towers.
They are both situated in the centre of a park which is then divided into 4 gardens (Char-Bagh). The gardens are formed of 4 raised avenues which have waterways running through them. We also see the usual enclosing walls & side buildings 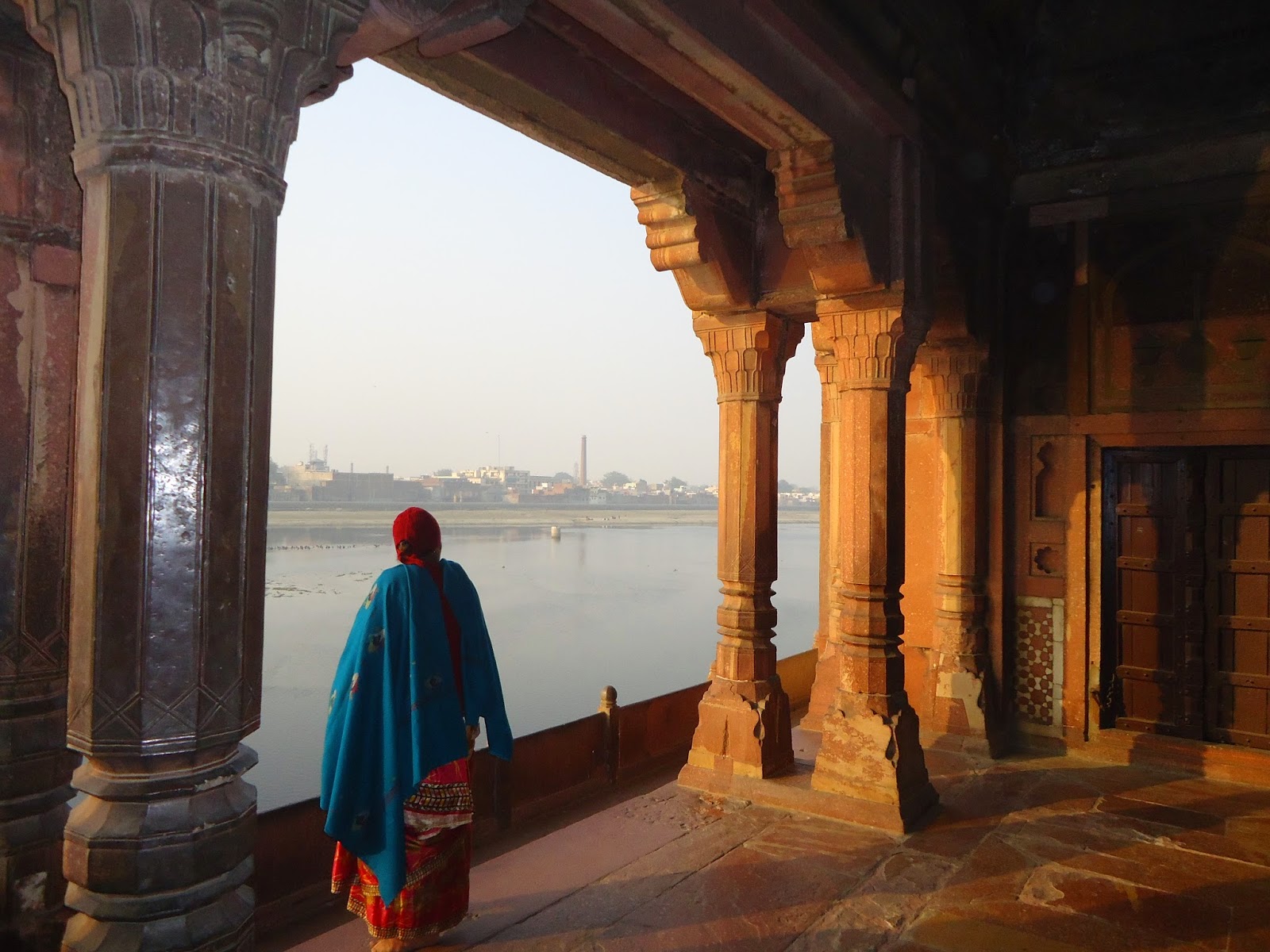 There is also a multi-storied open pleasure pavilion on the western side which overlooks the river.
This is made of red sandstone, inlayed with white marble. The tomb is situated on the left bank of the river Yamuna. 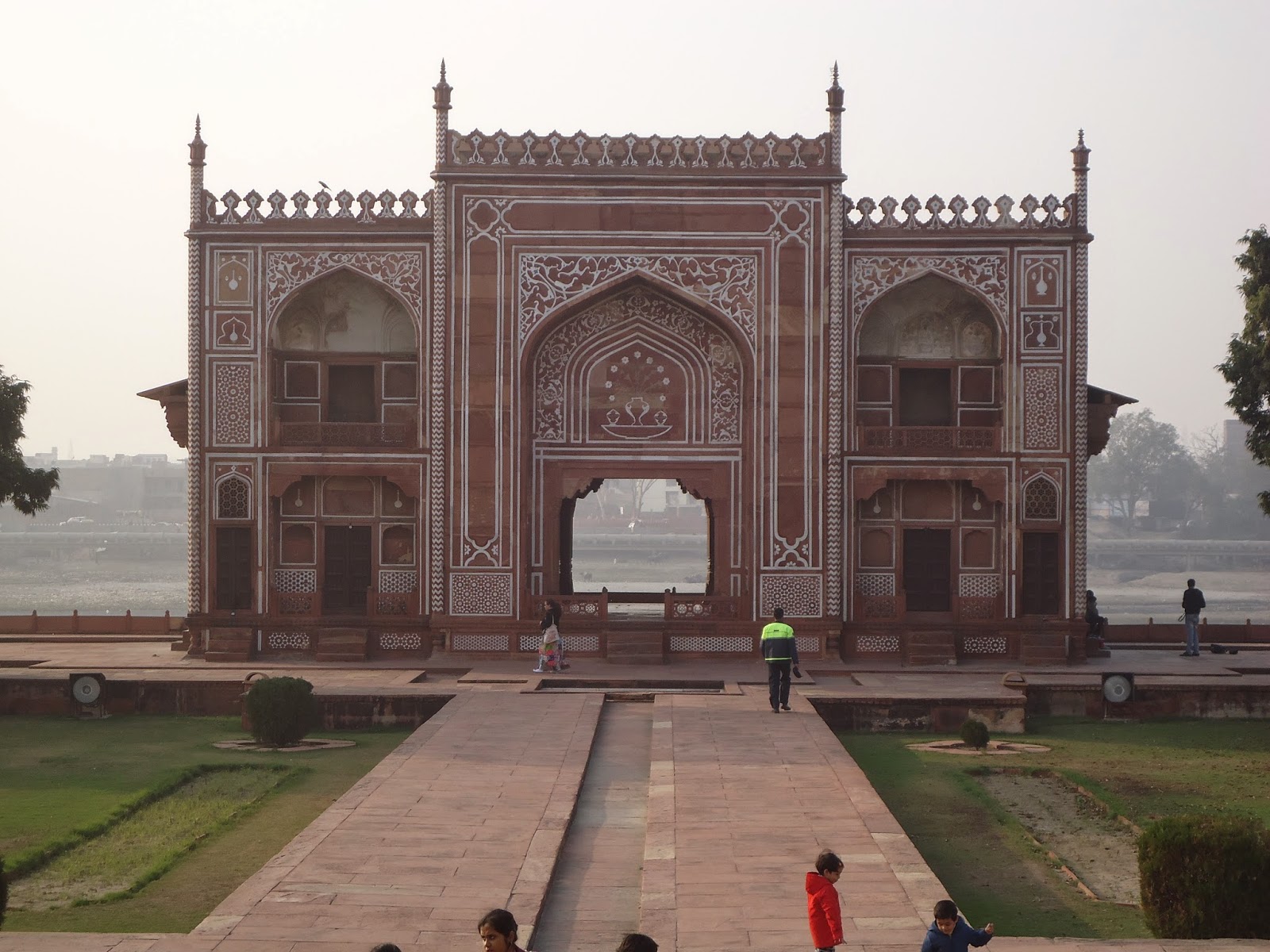 Above is a view of the Western Pavilion which overlooks the river. Notice that it's built in the older "Monumental Style" of red sandstone/marble inlay.

This layout evokes the "Persian Paradise".... the fountain of life plays in the centre from which 4 holy rivers gush.... the deceased is in the centre of paradise for eternity. 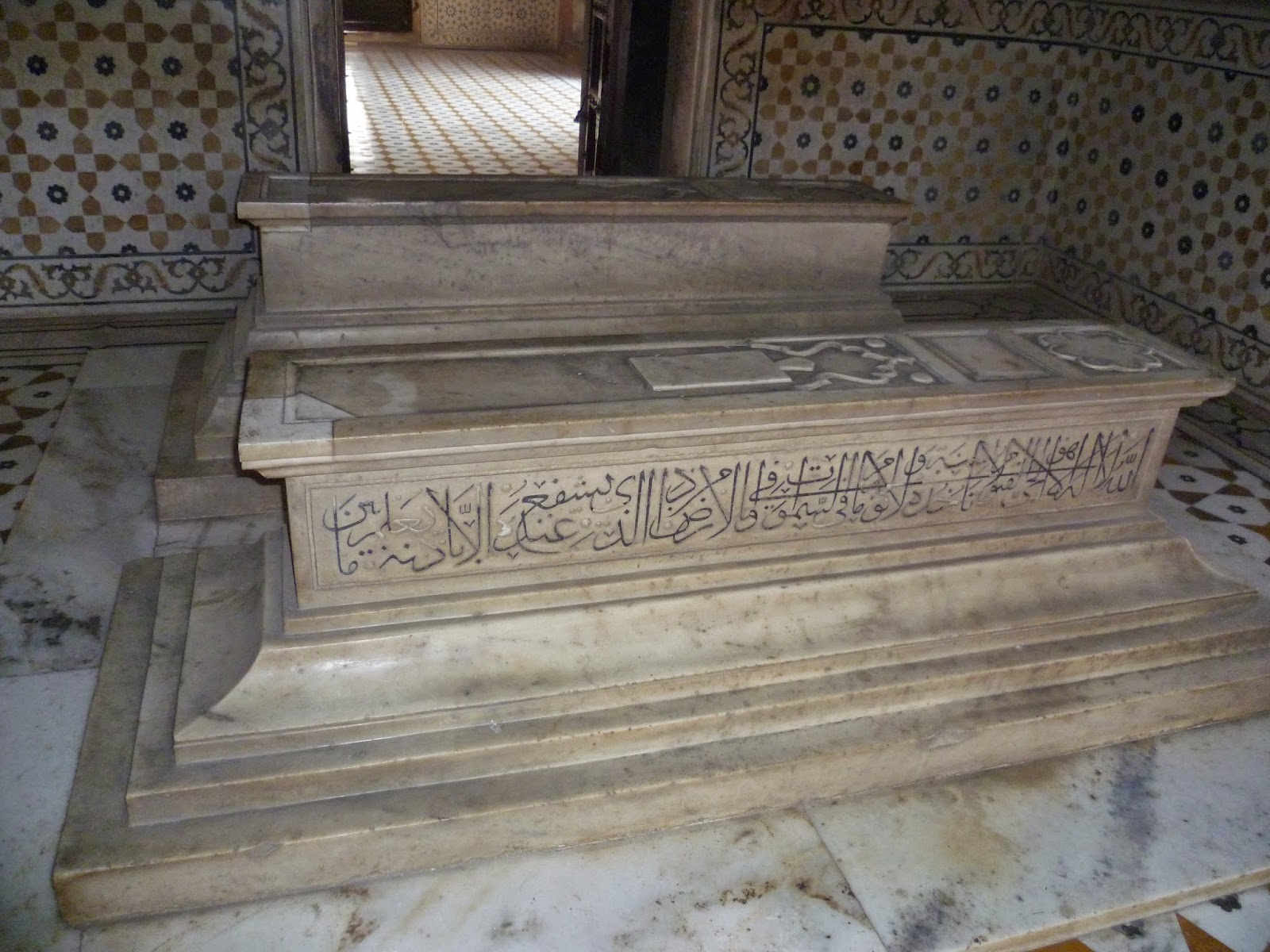 The central room of the mausoleum (qubba) is a cube. In this case it is not covered with the usual domed ceiling. Here, the building is roofed with a square "Barahdari". 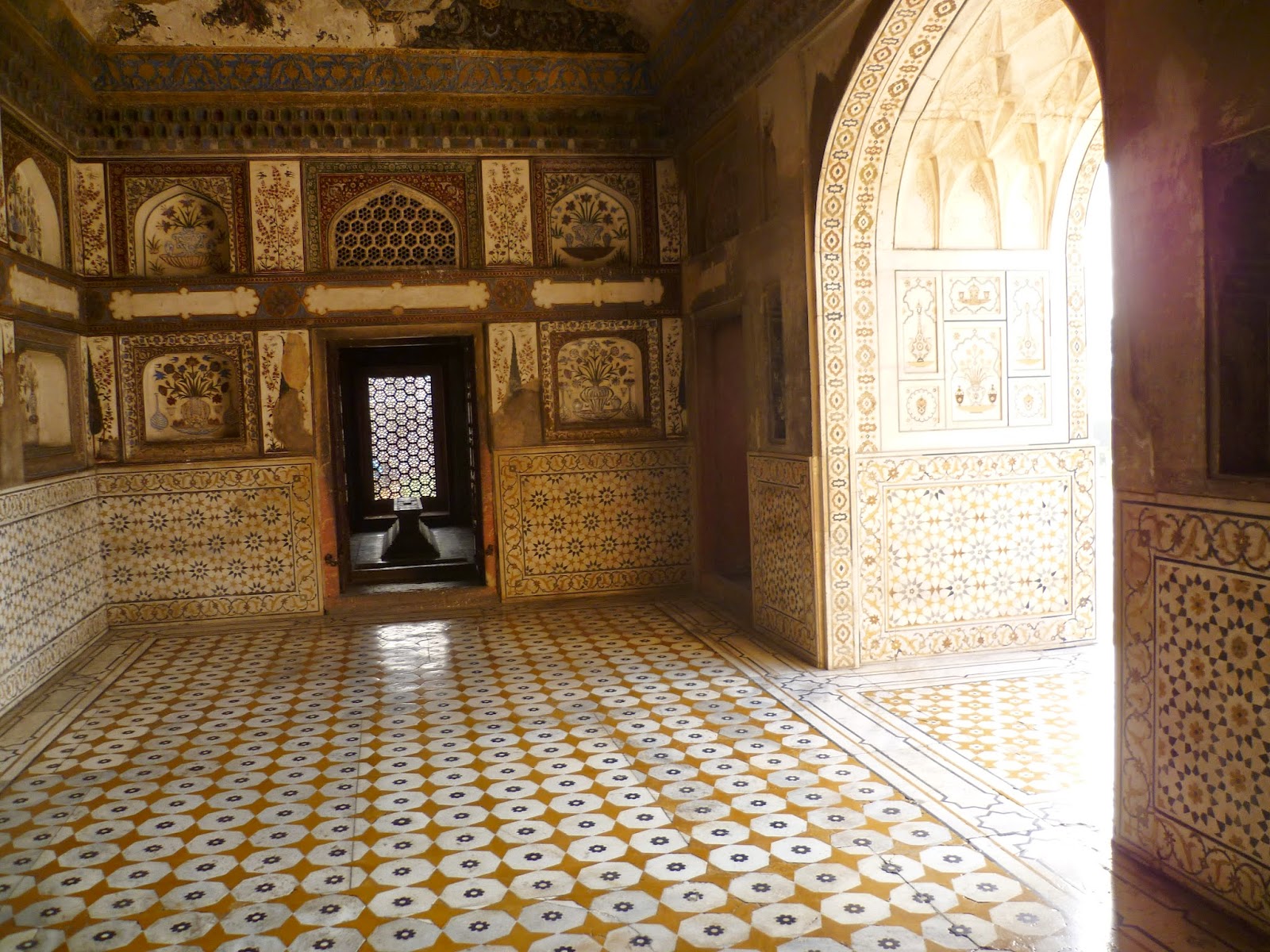 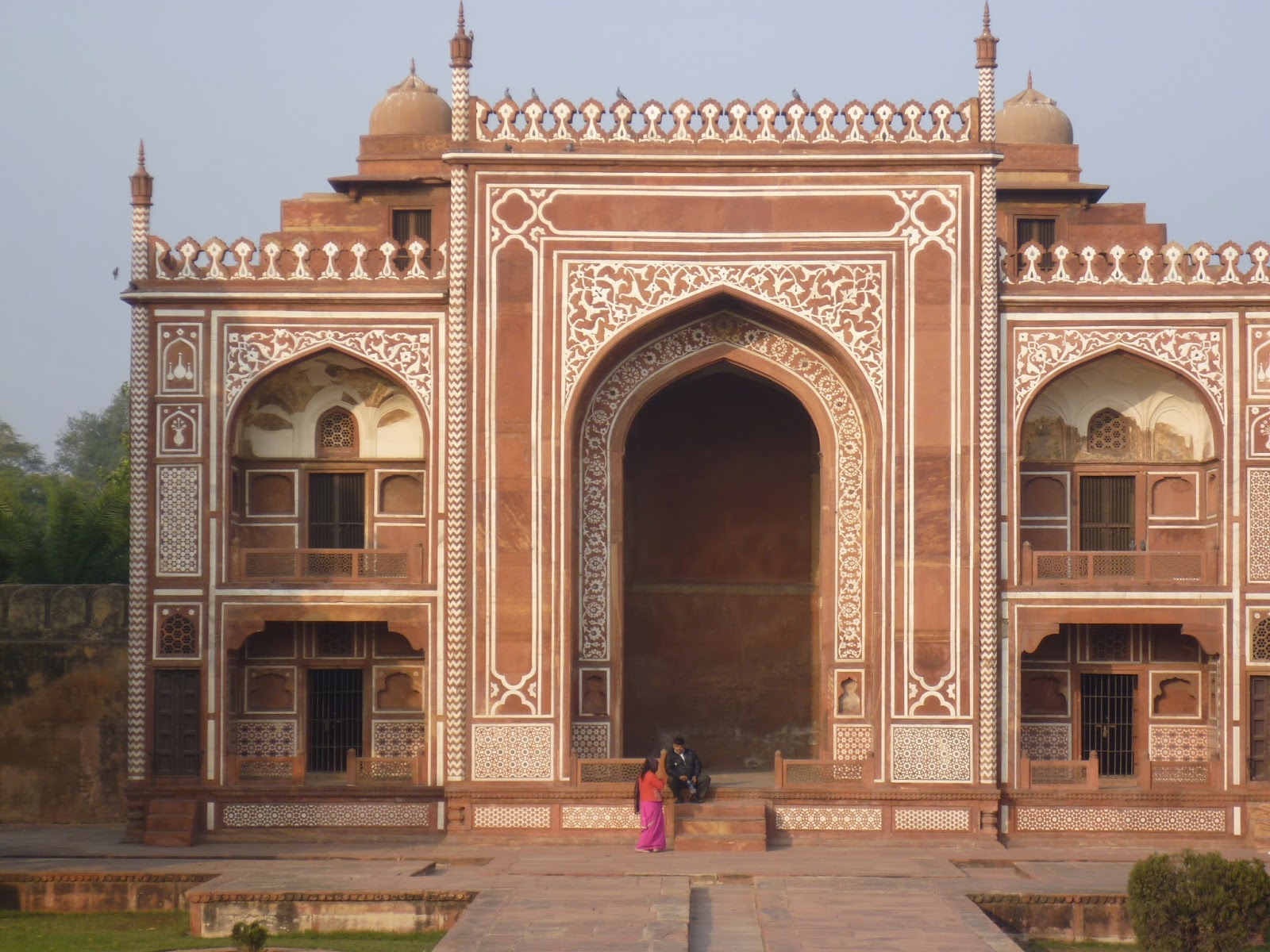 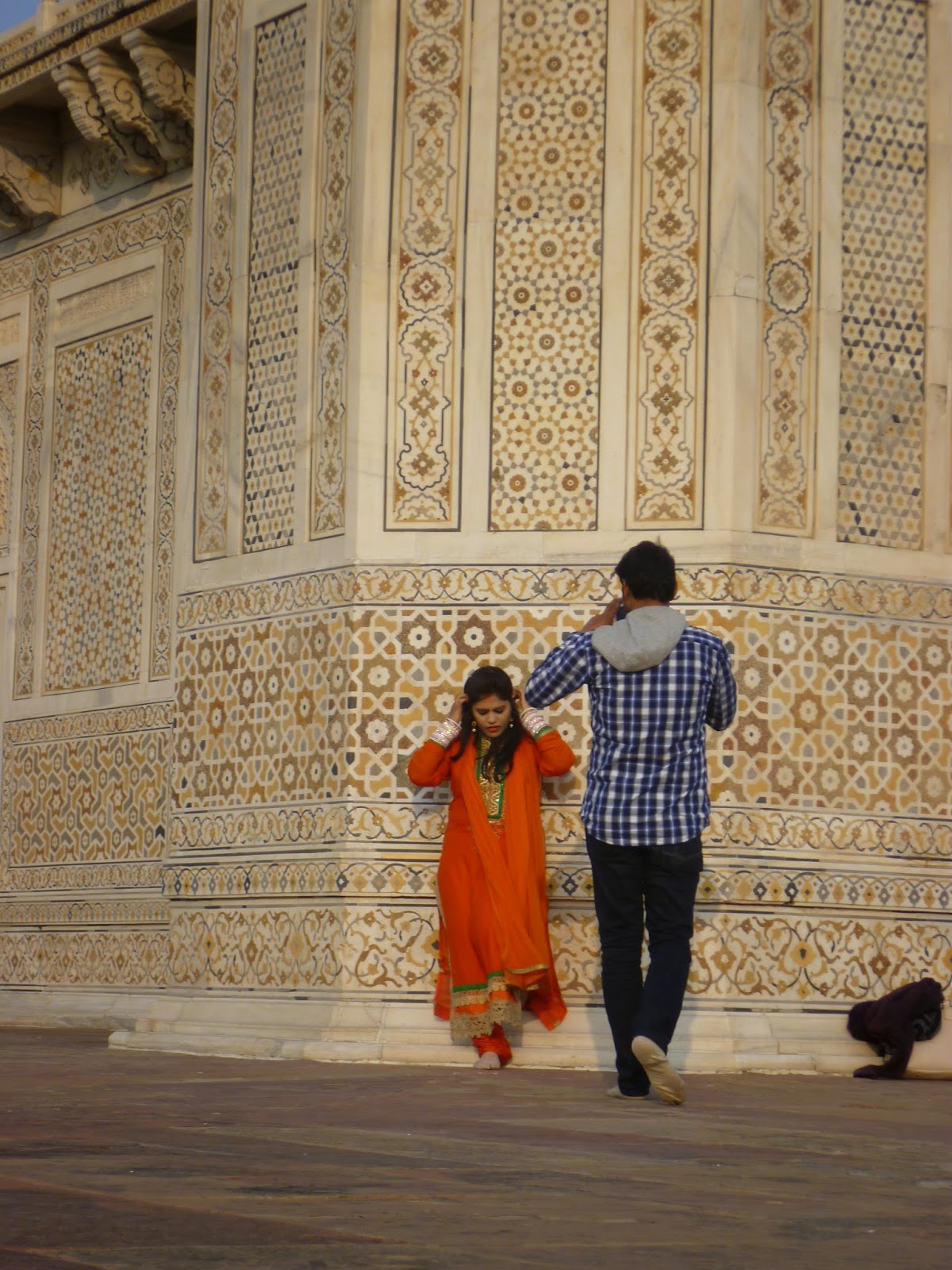 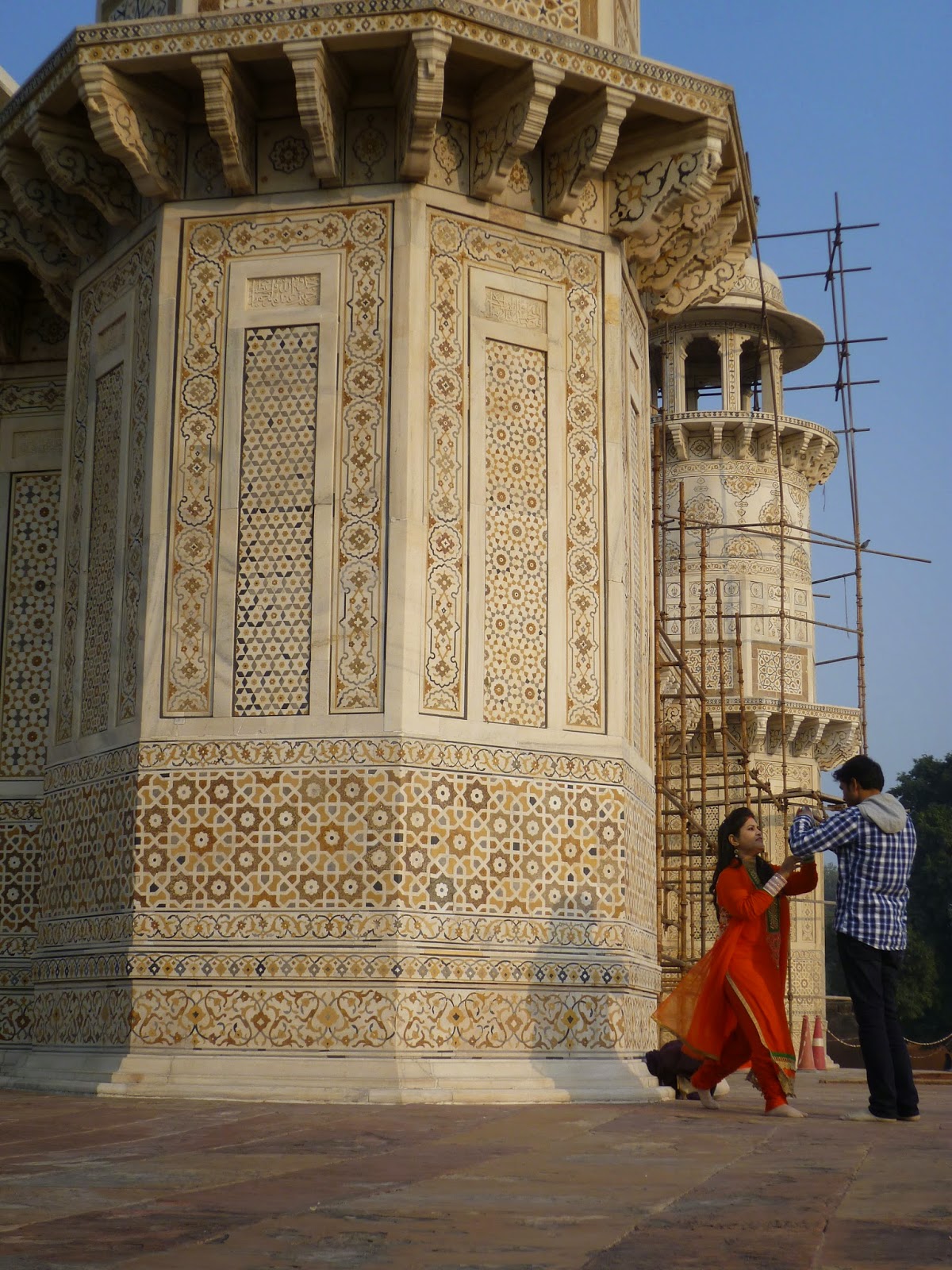 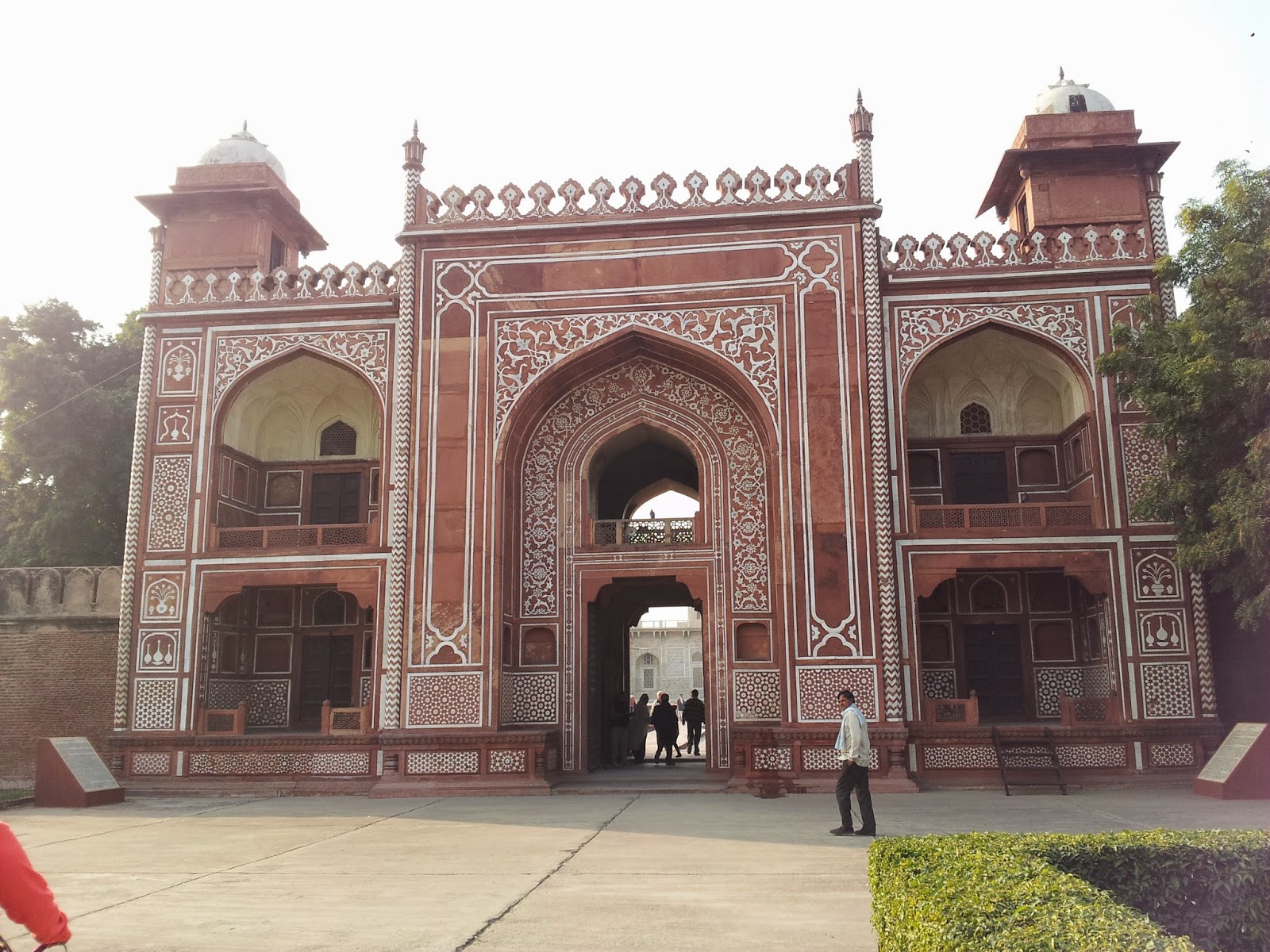 This is the main entrance to the tomb (The Eastern Gate). Notice the use of red sandstone with white marble inlay.
Posted by Jondent at 13:19