Filtering noise is really important when building your synth.
Lots of ways to do this and the method may vary depending on the scale ... does the noise effect the whole synth (the PSU) or a small part of a circuit.
Decoupling capacitors, Ferrite beads, Inductors, LC Filters ??

I guess before you do this, you need to ask the questions;

Ferrite Beads
A ferrite bead and capacitor is another form of LC Filter. It is often used to filter power for specific power pins on an IC.  They are frequently used on sensitive parts of a circuit like PLL’s & analog sections.

LC filters are used to keep noise in one section of the circuit from getting to another section.

Decouplig Caps.
A decoupling capacitor is a capacitor used to decouple one part of an electrical network (circuit) from another. Noise caused by other circuit elements is shunted through the capacitor, reducing the effect it has on the rest of the circuit. (Wikipedia)

Also known as bypass capacitors.
They act as energy reservoirs ... you will often see them close to ICs ... they help to smooth out any voltage fluctuations.

You can also use decoupling caps on your main power distrobution board.
Here is an example for eurorack:
NLC power distro board


Below is a LM7805 voltage regulator.
Notice the two decoupling capacitors:
The capacitors are placed between the power line & ground.


As mentioned earlier, decoupling are often used with ICs. Logic circuits tend to do lots of sudden switching ... between on & off with not much in between..So decoupling caps help to smooth  and stabilize the input voltage..... absorbing excess voltage if the voltage spikes suddenly, and providing more power to the IC should the voltage suddenly drop.

The decoupling capacitors are connected between your power source, whether that’s 5V or 3.3V, and ground. (Generally it's recommend to use a 100nF ceramic capacitor and a larger 0.1-10uF electrolytic capacitor for each integrated circuit).

Inductors
These are also called coils or chokes.
They are passive two terminal components.
Like capacitors, they store energy. 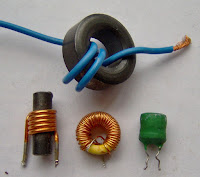 However, in this case, energy is stored as a magnetic field.
They are usually made up of a insulated wire, wound round a core (magnetic ... iron or ferrite).

Ferrite Beads.
Also called Ferrite chokes, cores, rings, blocks, EMI filters.
These are passive components that suppress high frequency noise.
They are often wrapped around cables to  prevent the cable from acting like an antenna and receiving interference from other devices.

These are snap on ferrite beads. The upper pic shows one used at the end of a USB cable. 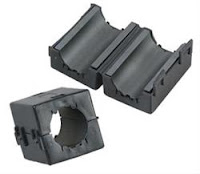 Ferrite beads convert Radio Frequency (RF) energy to heat. They are like a filter.
(Contrast this with inductors, which by design do not convert RF energy to heat, but rather offer a high impedance to RF.) 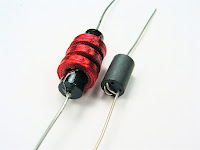 
I recently read a great article from Texas Instruments re splitting ground planes as a way to reduce digital noise.
http://www.ti.com/lit/an/slyt512/slyt512.pdf
A ground plane is an electrically conductive surface, usually connected to electrical ground.
On a PCB this is a large area of conductive material which is connected to the power supply ground terminal and serves as a return path for current from different components on the board. 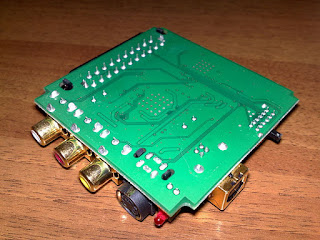 Placing the ground planes below the relevant components and signal traces is also helpful. ...
maybe on a seperate layer of a multi-layer PCB .
This should help reduce electromagnetic interference, cross talk & ground loops.

I often see single ground planes on pcbs (with just analog components).
But if there are both analog and digital circuits on a single PCB, best practice seems to be to:
"separate the ground plane on the back layer into a digital section and an analog section, but leave the two planes connected near the return to the power supply. This ensures that digital signals do not follow a return path beneath sensitive analog components....

It is a bad idea to completely split a ground plane and try to bring the sections to the same potential using something like a ferrite bead, as this creates more EMI and noise problems ." (Altium resources) 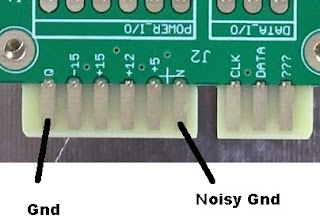 This may be the reason.
Two separate grounds for analog and digital.???
He never used this on the earlier 200 series.
This type of distro was first used in the 200e which of course uses digital components.

Other ways to reduce noise:
+ Use two separate supplies .. one for the analog & the other for digital
+ keep the analog & digital components separate & don't let their grounds touch.

But I think splitting your ground planes is a really neat idea.

Email ThisBlogThis!Share to TwitterShare to FacebookShare to Pinterest
Labels: DIY