Some very basic info re LEDs
Light Emitting Diode orientation.
The earliest LEDs seem to have appeared around 1962
Before this there were incandescent lamps (you will see these used on early Buchla 100 modules... eg the 123 sequencer)

Note: If there is no flat side marked on the PCB use a multimeter to find the ground.
Usually, the ground is the round pad = .cathode (though I have seen the reverse being used).

In my experience, LEDs usually follow the same convention as used in electro caps.
Most aluminum caps come with the positive lead longer than the negative and when inserting them I aim the longer lead for the square hole.

You will probably see these used a lot in synths.
Like regular LEDs, they have just 2 pins : Anode & Cathode
but they also allow two colours (red & green for example) .
Only one colour will appear at a time.... this is determined by the polarity of the connection.

I used this type of LED when building the NLC sloth.

The most common colours are red/traditional green, however, other colours include amber/green, red/green, red/blue, and blue/green.

LED's that provide three or more colours can have two, three or four pins allowing for a wide range of mixed colours. Some have a common Cathode. With other types, the anode is common.
There some types with only 2 leads (anode + Cathode) ....  here, the colour is determined with a built in electronic controller.

Two LED Tri-colour
These have 3 pins but contain just 2 LEDs (red & green) in the one package.
When both the red and green LEDs are turned on, the LED appears to be yellow. 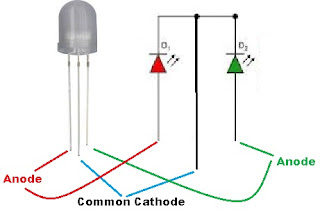 The common cathode is the centre leg, which is where the resistor should be fitted.
The outer leads are both anodes. .... allowing the LEDs to be lit separately
Green is the shorter leg.

RGB LEDs
These contain one green, one red and one blue LED in the single package.
They however have 4 Leads with a common cathode (usually).
This allows simultaneous use of all the LEDs. If you illuminate the different LEDs to different levels you can achieve almost any colour. 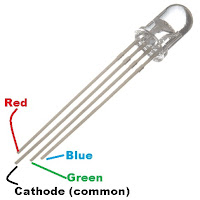 These are sometimes called multi-colour LEDs since more colours than just RGB can be achieved.

LEDs are current dependent and thus it is necessary to protect them from excessive current with a resistor. You attach the resistor in series (Rs).
To determine the required resistance use this formula:

You can usually find the LED voltage from its data sheet.
Eurorack will have a supply voltage of 12V.
You just need to work out the current.