Fixed Filter banks have been around from the earliest days.
But they are often misunderstood.
They look like simple graphic equalizers. This is not the case.
In the case of a EQ, each band has a boost & cutoff. If all the sliders were in the centre position
the input will be the same as the output.
In the case of the 907, the output is definitely not the same as the input. The frequency changes as it passes through each stage.
The knobs for each stage are attenuators. They do not have gain.

The 907 is a beautiful module to behold. It seems so simple, yet it's classic design is an example of why Moog modulars are still revered around the world.
We have just 2 jacks --- input & output.
In between there are 10 filters. 8 bandpass & a low & high pass at either end (shelf filters).
(The later Moog 914 provided 12 instead of 8 filters).

The 907 has 8 bandpass fixed-frequency filters spaced at approximately half-octave intervals:
They have centre frequencies of 250Hz, 350Hz, 500Hz, 700Hz, 1Khz, 1.4KHz, 2KHz, and 2.8KHz.
Each of the BPFs has a single knob for boosting or cutting frequencies within it's range. 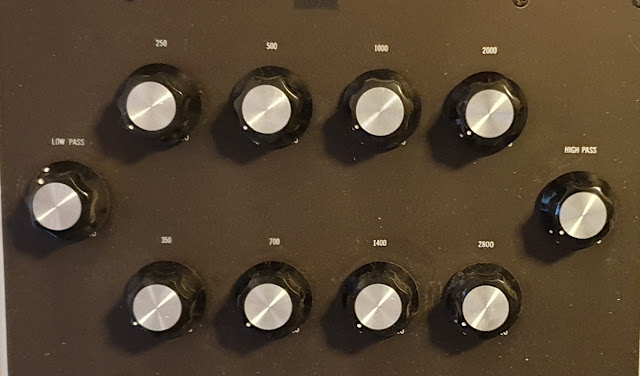 There is no voltage control.


The special sound of the 907 is I think due to the the sharp sonic notches produced between the adjacent filter bands. Some people say it's because of the inductors used in their manufacture.

+ Inductors, ferric beads, noise reduction methods, etc
Inductors are basically coils of wire.
Each band uses a LC-filter ... which is a capacitor/inductor combo.

The filter has a total of 10 overlapping LC networks.
The claim is that they introduce nonlinear irregularities.

"The Fixed Filter Bank is often referred to as formant filter because it can be set
to emphasize or attenuate midrange frequencies, which fall within a particular band,
no matter how the frequencies of the signal are moved.
Like many acoustic instruments, a characteristic set of formants, are always a part of the
resultant output (given a particular complex waveform). Emphasized bands of this sort are
particularly evident with double reed instruments.
Thus, this filter is part of the patch for these simulations.
In addition, completely different timbres can be set up for different ranges of the same tone,
if the output of the filter is recombined with unfiltered frequencies at different levels. "
(Moog Manual)

There are quite a few fixed filter banks in the modular world.
Eurorack: The Doepfer A128, Analogue Systems RS215, Behringer 914, AJH Fixed Filter Bank 914,
Aion 907A FFB. 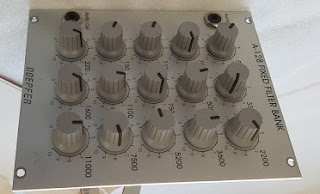 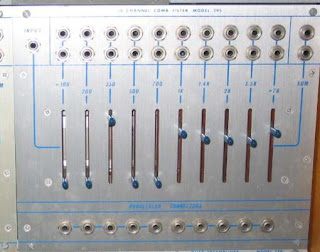 Don described the 296 thus:
"It has 16 channels of filtering, but they cover the same frequency range of a 24 channel 3rd octave filter because they are constant BARK FILTERS  and the channels are wider 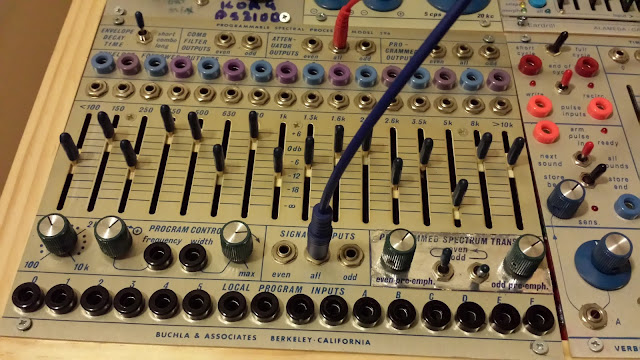 Moog also introduced a series of filterbanks into one of their pedals:
The MuRF. : Multiple Resonance Filter Array
The MF 105 came out around 2004. It's a classic pedal. 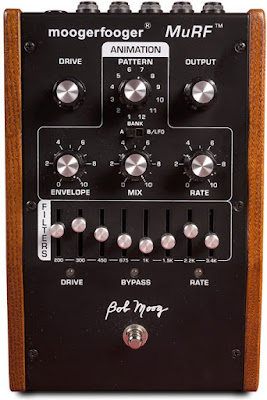 It contains 8 resonant BPFs, with their own level sliders, a sine LFO, and a sequencing envelope generator. You can control the tempo with a pedal or knob. Its really cool to sequence the different filter settings.
There are 24 preset patterns
Rhythmic variations can be created by adjusting the levels of the filters. 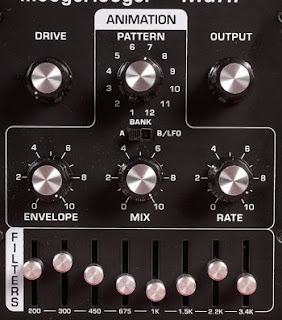 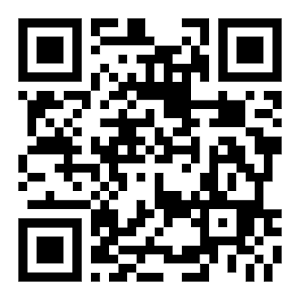